SEOUL, Jan. 4 (Yonhap) -- South Korea's top economic policymakers said Thursday that they will do their best to manage economic and financial risks in a way that maintains economic growth momentum in the new year.

"Despite some downside risks at home and abroad, the South Korean economy pulled off favorable growth last year thanks to strong fiscal policies," Bank of Korea Gov. Lee Ju-yeol said in a breakfast meeting in Seoul with Finance Minister Kim Dong-yeon. "This year, we expect the economy to continue on with the recovery pace, but there are still risky factors that require us to remain vigilant."

Finance Minister Kim also said he will cooperate with the central bank to reach the 3 percent growth target in 2018.

"This meeting is to share our views on the economic environment and policies and risk factors and seek ways to enhance policy coordination between the fiscal and monetary authorities," Kim said.

Thursday's Lee-Kim gathering is their fourth round of such policy talks since Kim's inauguration in June last year.

Backed by solid economic growth and a rise in income, South Korea's per capita gross domestic product (GDP) is widely forecast to surpass the landmark US$30,000 threshold in the coming months. 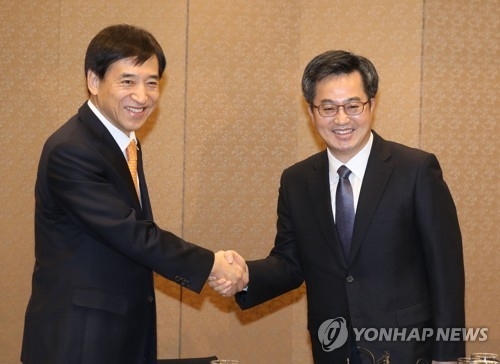