SEOUL, Jan. 4 (Yonhap) -- The South Korean government on Thursday awarded Lt. Gen. Thomas S. Vandal, the outgoing commander of the U.S. Eighth Army, a medal of merit for his contribution to the alliance.

Defense Minister Song Young-moo presented Vandal with the Gukseon Medal, the second-highest class in the Order of National Security Merit, on behalf of the government, according to the defense ministry.

The order is conferred on those who have rendered distinguished service to national security. 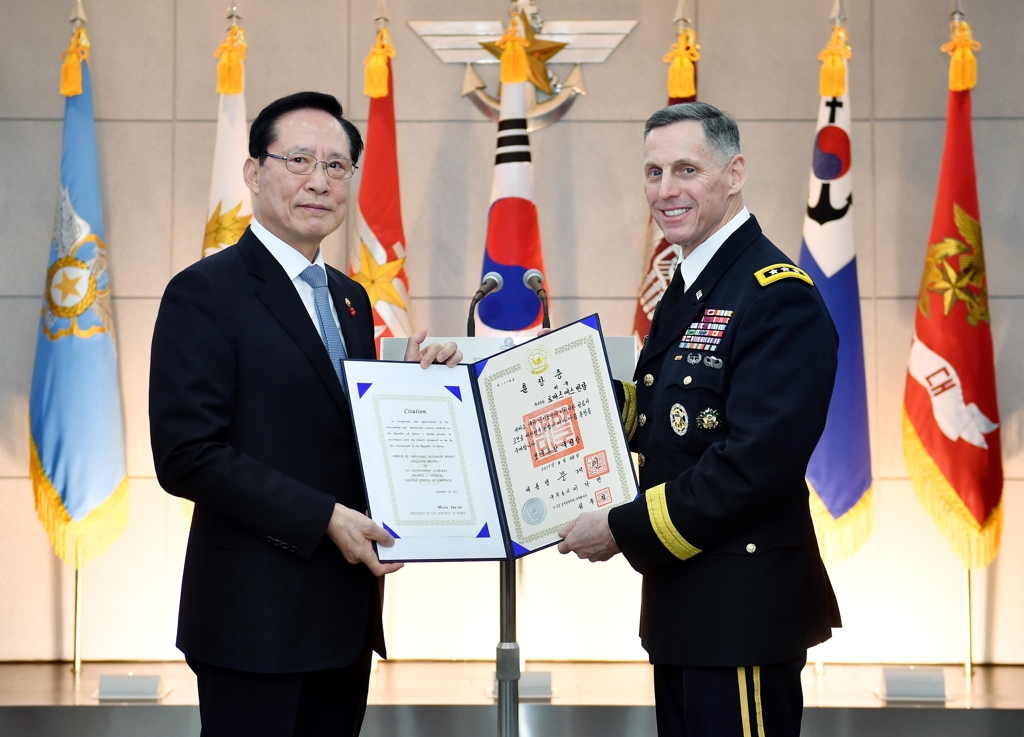 Gen. Jeong Kyeong-doo, chairman of South Korea's Joint Chiefs of Staff, and Gen. Vincent K. Brooks, commander of the U.S. Forces Korea (USFK), were among the dignitaries who attended the ceremony, which was held at the ministry's building in Seoul.

Vandal assumed the post of commanding general of the 2nd Infantry Division stationed in South Korea in June 2013. He took office as the leader of the Eighth Army in February 2016 after serving as the USFK's operations officer.

"During his service in South Korea, he contributed to the defense of peace and stability on the Korean Peninsula in response to North Korea's various provocations, including three nuclear tests and dozens of missile launches," the ministry said.

In addition, Vandal successfully handled several alliance issues, such as the deployment of the THAAD missile defense system, the creation of the allies' combined division and the relocation of USFK bases, the ministry added.

He will be replaced by Lt. Gen. Michael A. Bills in a change of command ceremony to take place at Camp Humphreys, Pyeongtaek, on Friday.