SEOUL, Jan. 4 (Yonhap) -- President Moon Jae-in was set to hold a meeting Thursday with a group of former wartime sex slaves of the Japanese military at his office Cheong Wa Dae, officials said, in an apparent show of his objection to a controversial deal over the issue between Seoul and Tokyo.

The meeting was to be held over lunch, involving eight former South Korean sex slaves of the Japanese military during World War II, according to Cheong Wa Dae officials.

It followed the president's trip to visit a 90-year-old former sex slave at a local hospital. 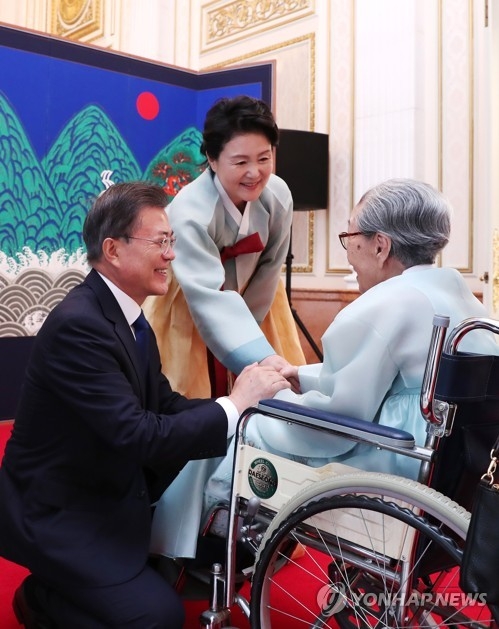 Thursday's meeting also came about a week after the government stated that the 2015 deal between the two countries failed to adequately address the so-called comfort women issue, following its monthslong review of the agreement signed by the previous South Korean administration. The Moon Jae-in administration came into office in May following a presidential by-election caused by the ouster of former President Park Geun-hye.

Moon declared that the deal could not resolve the issue, which has been a matter of dispute between Seoul and Tokyo since Korea's liberation from Japanese colonial rule (1910-45).

"Along with citizens, I, as president, make it clear again that the comfort women issue can't be settled through the deal," Moon said.

A Cheong Wa Dae official noted that Thursday's meeting was partly intended to provide a chance for the president to offer his personal condolences to those who suffered years of hardship under Japanese colonial rule but also at listening to their wishes and how they wish to resolve the longstanding issue.

The government review, announced last week, suggested that the 2015 agreement did not adequately reflect victims' views.