(ATTN: RECASTS headline, lead; UPDATES with reports of outcome of the meeting between the president and former sex slaves; REPLACES photo)

SEOUL, Jan. 4 (Yonhap) -- President Moon Jae-in on Thursday reiterated his stance that a 2015 deal between Seoul and Tokyo on ending their longstanding dispute over former wartime sex slaves is defective but said the incumbent government may still work with the agreement to resolve the issue.

"We have said the agreement signed by the former government is defective, but there are some difficulties because it is also true the former government made an official agreement and we must resolve the issue under the existing relationship between the two countries," the president said while visiting a 90-year-old former sex slave, Kim Bok-dong, at a local hospital. 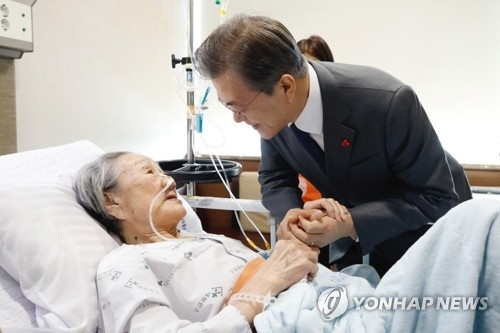 "The government will do its utmost even though we may not be able to do everything the way our grandmothers want, so I hope you will have peace of mind," the president added, according to Cheong Wa Dae spokesman Park Soo-hyun.

The remarks came shortly before the president hosted a lunch at his office Cheong Wa Dae for eight other former sex slaves.

"It was my wish to invite you all to Cheong Wa Dae, and I am very glad to have you all here at the very place today. I wish you'd see this as part of efforts by our nation to do all its duties," the president was quoted as telling those at the luncheon, which also included officials from civic activist groups supporting the aging former sex slaves.

Thursday's meeting came about a week after the government stated that the 2015 deal between the two countries failed to adequately address the so-called comfort women issue, following its months-long review of the agreement signed by the previous South Korean administration. The Moon Jae-in administration came into office in May following a presidential by-election caused by the ouster of former President Park Geun-hye.

Moon offered an apology to the former sex slaves, noting the country had failed to protect them while under Japanese colonial rule from 1910-45 and that it again failed to reflect their demands or wishes when it signed what he called the "defective" agreement with Japan in 2015.

"The previous agreement did not only go against the principle of truth and justice, it was a defective agreement both in its contents and in the procedure that was pushed by the government without listening to the opinions of the victims," the president said, according to the Cheong Wa Dae spokesman.

A Cheong Wa Dae official earlier said the meeting was partly intended to provide a chance for the president to offer his personal condolences to those who suffered years of hardship under Japanese colonial rule but was also geared toward listening to their wishes and how they wish to resolve the longstanding issue.

"As president, I cannot deny the fact that it was an official agreement between the two countries, but I have declared we cannot agree that the comfort women issue has been resolved through that agreement," Moon said.