SOKCHO, South Korea, Jan. 5 (Yonhap) -- Dishes made from squid have traditionally been common fare in South Korea, even though they may seem exotic to foreign visitors. But now, locals are worried that the cephalopods may no longer be found on dinner tables.

Park Jung-gwi, who has been working in the fishing industry for some 40 years in Sokcho, a port city along the East Sea, told Yonhap News Agency he has never experienced such a shortage of squid.

"We can say that squid are drying up around here," Park said. "I went out fishing the other day, and came back with a very small catch." He added that it is even hard for him to earn enough money to pay for fuel nowadays, which costs at least 500,000 won (US$470) for a one-time operation, or even up to 1 million won depending on the distance that needs to be covered.

Sokcho, located about 210 kilometers east of Seoul, is a popular tourist destination which boasts breathtaking views of both the mountains and the sea. The port city is also one of the major hubs of the country's fishing industry.

Despite the city's reputation, Park said his profits have dropped nearly 60 percent in recent years due to the shortage of squid. 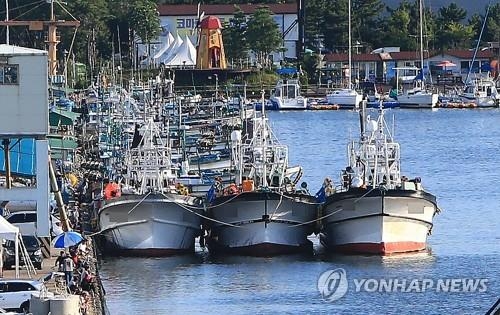 "I can still generate a small profit despite the dwindling number of squids caught because prices are up sharply. But I cannot continue like this," Park said. "The situation is the same for other fishing boats too. For this season, some fishermen are even giving up their operations."

The Korean Consumer Agency's data shows that the price of squid soared throughout 2017. On average, two fresh squid sized around 25 centimeters were selling at 8,500 won at traditional markets as of the end of December, which marks a sharp rise from 5,865 won a year earlier.

"Our boats are only able to catch 15 percent of the squid raked by Chinese boats," Park said. "We lure squid with lights, using traditional methods. But Chinese boats are literally sweeping the ocean floor."

"With Chinese boats sweeping the ocean floor, they leave little area for squid to lay eggs and reproduce. Accordingly, there are fewer squid with less managing to arrive in South Korean waters," an official from the National Federation of Fisheries Cooperatives said.

Ulleung Island, some 120 kilometers off the eastern coast, also depends heavily on squid for its earnings, but this sector is in crisis as the island only produced 985 tons of squid in 2016, marking a sharp drop from around 10,000 tons in the early 2000s.

"Chinese boats sometime travel as far as Ulleung. The government should crackdown on such practices," Park said.

Experts, however, say there are limits on government actions, as the Chinese fishing boats are operating in the East Sea under an agreement with North Korean authorities.

Kwon Hyouk-ryeol, a lawmaker who heads the agricultural and fishery committee under Gangwon County Council, nevertheless said it is vital for the government to come up with detailed plans to save the region's industry.

"Squid processing factories in Jumunjin used to hire some 1,000 workers, but the number dropped to 500 this year," Kwon told Yonhap. This, he said, is becoming a major threat to the region's economy.

Jumunjin, a part of Gangneung, is a port town located on the eastern coast, around 50 kilometers from Sokcho. 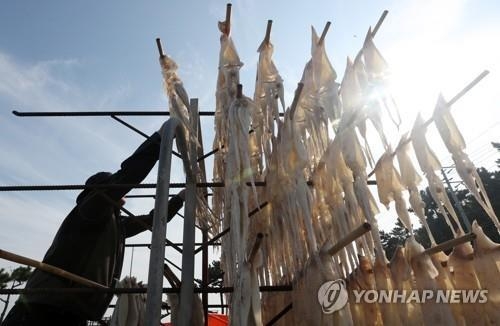 "While the factories can seek to import squid from overseas markets, the amount of catch from Peru or Chile is also falling due to climate changes," Kwon said. According to the lawmaker, the number of Chinese fishing vessels operating in North Korean waters was estimated at 140 ships in 2004, but the figure surged to a whopping 1,238 ships as of 2016.

Kwon said South Korea should come up with a long-term strategy to support the troubled industry, including designating the region as a special economic zone to prevent factories from going out of business.

"We cannot help but hold the government responsible for failing to make diplomatic efforts to cope with the issues," Kwon said. The lawmaker claimed that the government should financially support fishermen and factories hurt by the falling amount of squid and seek diplomatic solutions as well.

Street vendors at the regions' fish markets are also calling for action, claiming the trend will have an adverse impact on the region's tourism industry.

"Squid used to be treats for ordinary people," said a merchant surnamed Lee, who sells dried squid at a Sokcho-based fish market. "But nowadays, they are as pricey as gold. Only those who crave squid purchase them."

"We are trying to keep prices as low as possible to maintain our regular customers," another merchant said. "But it is getting tougher for us to maintain our businesses. Some action needs to be taken."