The KT Wiz of the Korea Baseball Organization (KBO) said they've agreed to terms with Nippert on a one-year deal worth US$1 million. Nippert was scheduled to undergo a physical later Thursday.

The Wiz extended the 36-year-old a lifeline after his former club, the Doosan Bears, declined to retain him for his eighth season following a sub-par 2017.

Wiz general manager Lim Jong-taek said Nippert is "a proven commodity" in terms of his skills and work ethic. 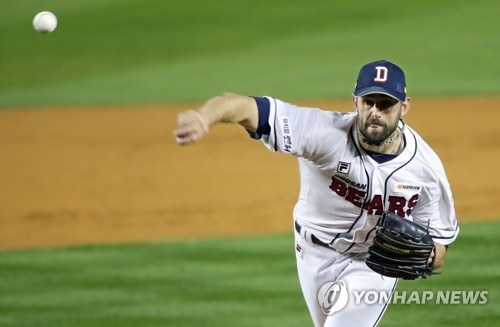 "Some of the players we were after decided to either stay put in the U.S. or sign in Japan, and time wasn't on our side with spring training approaching," Lim said. "We had the list of players who've previously pitched in the KBO before, and we felt Nippert would make the biggest contribution to our ball club."

Nippert had been the Bears' ace since 2011, making six Opening Day starts in his seven seasons there, and also won the regular season MVP award in 2016. He's currently the longest-tenured foreign player in the KBO.

Nippert made $2.1 million last year, and the Bears sought to bring him back at a much lower price tag. When the two sides couldn't come to an agreement, the Bears signed another KBO veteran, Josh Lindblom, in Nippert's stead on Dec. 11 to fill their foreign pitchers quota of two. The Bears had earlier replaced right-hander Michael Bowden with another righty, Seth Frankoff.

The lanky right-hander, listed at 203 centimeters, is joining a fourth-year expansion club that has been in the league cellar during its first three seasons.

If Nippert can bounce back and Feierabend continues to baffle hitters, the Wiz will have one of the KBO's best righty-lefty combinations at the top of their rotation.

"Nippert himself wanted to play for us," Lim said. "I expect him to be a key piece in our rotation."