SEOUL, Jan. 4 (Yonhap) -- The 2018 South Korean professional baseball season will have the earliest start in league history, with a long midseason break for an international competition.

The Korea Baseball Organization (KBO) announced its schedules for the upcoming season, with March 24 as the league's 37th Opening Day.

This is also the first time since 2015 that a season will start on a Saturday. The KBO scheduled the past two Opening Days on Fridays.

The KBO scheduled a fast start to account for a break for the Asian Games in Jakarta and Palembang, Indonesia from Aug. 18 to Sept. 2. South Korea is the defending champion in baseball, and the national team will be almost entirely made up of KBO stars. The league will go on a hiatus from Aug. 16 to Sept. 3. 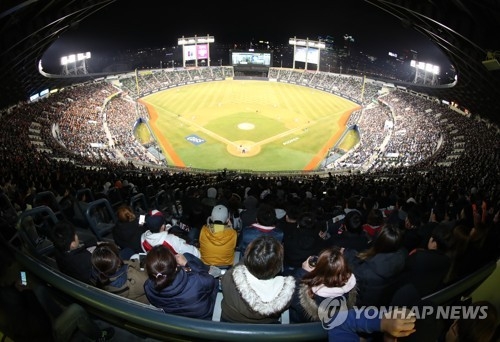 The reigning champion Kia Tigers will begin their title defense by hosting the KT Wiz for two games at Gwangju-Kia Champions Field in Gwangju, some 330 kilometers south of Seoul.

The Doosan Bears, runners-up last year, will play at home against the Samsung Lions at Jamsil Stadium in the nation's capital. Also in Seoul, the Nexen Heroes will face off against the Hanwha Eagles at Gocheok Sky Dome.

The SK Wyverns and the Lotte Giants will play at SK Happy Dream Park in Incheon, just west of Seoul. The NC Dinos will host the LG Twins at Masan Stadium in Changwon, 450 kilometers southeast of Seoul.

The All-Star Game will take place on July 14 at a venue to be determined later.

New baseball season to have earliest start in league history

New baseball season to have earliest start in league history