SEJONG, Jan. 4 (Yonhap) -- South Korea's agriculture ministry said Thursday that quarantine measures will be intensified against bird flu, as the latest outbreak in Gyeonggi Province has raised concerns with little over a month left before the start of the 2018 PyeongChang Winter Games.

The Ministry of Agriculture, Food and Rural Affairs heightened its alert level of avian influenza (AI) after a H5N6 strain was confirmed at a layer chicken farm in Pocheon, 45 kilometers north of Seoul, earlier in the day.

The virus has spread mainly in Jeolla Province, where there have been nine highly pathogenic cases since mid-November, but the first outbreak in Gyeonggi Province prompted stronger quarantine measures, as the area is close to Gangwon Province, which will host the PyeongChang Olympics from Feb. 9-25.

"The government will put in concerted efforts in cooperation with the livestock industry to contain further spread of AI in the run up to PyeongChang Winter Games," Agriculture Minister Kim Yong-rok said in a briefing. "We will also closely monitor the supply chain of poultry for a stable market. 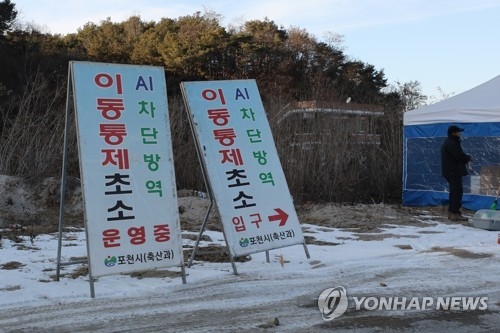 Following the report of a suspected case, the government on Wednesday imposed a 48-hour standstill order on poultry, equipment and livestock breeders in Gyeonggi Province and Cheorwon, east of Pocheon.

The government also culled 313,000 chickens within a 500-meter radius of the affected farm and will cull 384,000 more in the nearby region as part of preventive measures.

Another case of AI, the H5 type, was confirmed at a duck farm in the county of Gangjin, South Jeolla Province, on Thursday.

More than 21,000 ducks were culled at the affected farm and the quarantine authorities were considering a decision to cull other avian livestock within a 3-km radius of the farm.

The ministry said it will also step up inspections of duck farms in the southwestern region, a major duck producing area, and ban the entry of poultry to Gangwon Province to prevent further spread of the highly contagious virus.