Korean Air plans to add 18 new planes -- 10 CS300 aircrafts, four B787-9s and four B777-300ERs -- to its fleet this year. Moreover, its joint venture with Delta Airlines, which awaits approval from authorities, will allow the Korean flag carrier to serve more cities in the United States and Asian countries, a company spokesman said.

Asiana Airlines said it will focus on strengthening services on long-haul routes to Europe and the U.S., with a plan to add two A350 planes on those lucrative routes.

The country's two biggest passenger carriers are scheduled to announce their full-year earnings results for 2017 in late January or early February.

They plan to continue to beef up their fleets this year to absorb customers mainly on short-haul routes to Guam, Japan and other Asian countries.

In 2016, the six budget carriers transported 19.6 percent of all passengers traveling abroad. The figures were up from 14.6 percent a year earlier, according to the transport ministry. 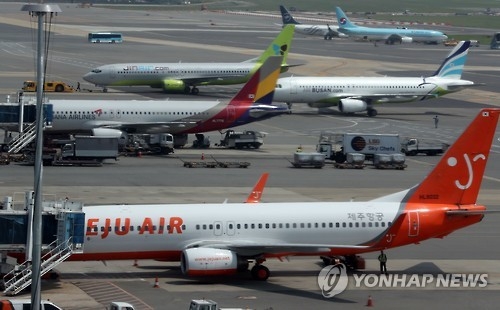 S. Korean airlines to focus on profitability, investments this year

S. Korean airlines to focus on profitability, investments this year