SEOUL, Jan. 4 (Yonhap) -- The leader of the minor opposition Bareun Party on Thursday expressed concerns over a possible rift between South Korea and the United States over how to handle North Korea's nuclear threat, amid the growing prospect of cross-border dialogue.

Yoo Seong-min pointed to Washington's tough stance on a belligerent Pyongyang, which is in contrast to Seoul's push for inter-Korean dialogue following North Korean leader Kim Jong-un's New Year's Day speech marked by a surprise olive branch to the South.

In an interview with the Washington-funded broadcaster Voice of America this week, U.S National Security Advisor H. R. McMaster said that anyone who thought that Kim's speech was reassuring was "drinking too much champagne over the holidays." He also cast the speech as an "unsophisticated approach trying to drive a wedge" between the allies. 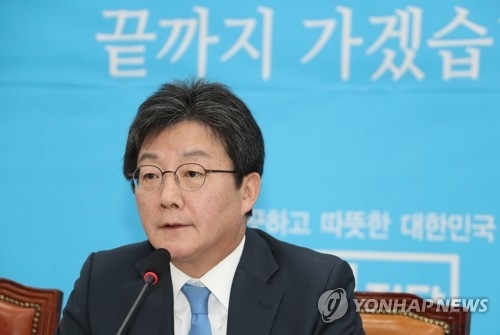 Yoo attributed the current security threats from the North to the failed policies of former governments, both conservative and liberal, and called for a new approach that breaks with "dangerous liberals and incompetent conservatives."

He then called for a denuclearization strategy featuring "super-strong" pressure and sanctions, the unswerving alliance between South Korea and the U.S., and the allies' robust combined defense capabilities.

He also reiterated the need for the redeployment of U.S. tactical nuclear arms, which were withdrawn from the South in the early 1990s.

After the North's leader signaled his willingness to send a delegation to the PyeongChang Winter Olympics, slated for next month, Seoul proposed holding high-level bilateral talks at the border village of Panmunjom next Tuesday.

The liberal parties here have welcomed the move, raising expectations for a thaw in the bilateral ties that have been strained by Pyongyang's continued provocations, including nuclear and long-range missile tests.

Conservatives warned that the North would use the dialogue to blunt the momentum for international sanctions against it, sow discord among South Koreans and undercut the Seoul-Washington alliance.