SEOUL, Jan. 4 (Yonhap) -- Hanwha Group said Thursday it has purchased 1,400 tickets for the PyeongChang Winter Olympics, which will be distributed to foreign soldiers studying here and the socially disadvantaged.

Hanwha held a ceremony at the Plaza Hotel in downtown Seoul, where 300 tickets were delivered to 80 foreign commissioned officers from 27 countries, who are in South Korea to study Korean, diplomacy and military science.

Lee Hee-beom, head of the 2018 Olympic organizing committee, attended the ceremony, as did Lee Tae-jong, president of Hanwha Corp.

"We hope the officers and their dependents will be able to share the precious experience of the PyeongChang Olympics with friends, relatives and family," Lee said.

Hanwha said it will also distribute the tickets to some social welfare facilities so needy people can watch PyeongChang Olympic events together with Hanwha employees.

Hanwha Group Chairman Kim Seung-youn said early this week his group will actively support the successful hosting of the PyeongChang Olympics, which will be held between Feb. 9-25 in the northeastern resort town of PyeongChang in Gangwon Province. 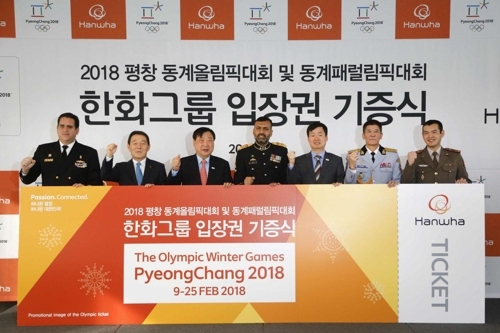