In 2016, South Korea required tobacco companies to put graphic warnings on the upper part of both sides of cigarette packs in a move intended to reduce smoking.

The photos are required to cover more than 30 percent of both sides of a packet.

The pictorial warnings need to be changed every 24 months as part of efforts to maintain the intended purpose of curbing smoking, according to the Ministry of Health and Welfare.

The graphic images show smokers suffering from fatal ailments, such as lung cancer, oral cancer, laryngeal cancer, heart attack and stroke, while also carrying warnings of serious side effects, such as the dangers of second-hand smoke, sexual dysfunction, skin aging and premature death, according to the ministry.

The new graphic images are set to be placed on cigarette packs on Dec. 23 after being approved by a committee composed of eight civilian experts and four government officials. 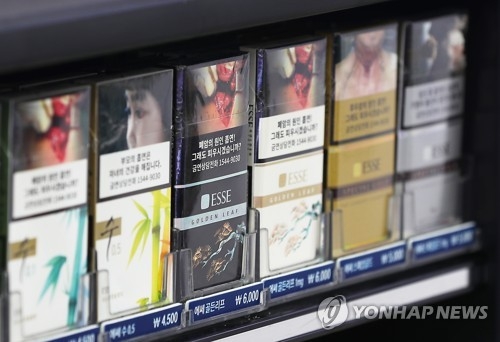 The committee held a meeting earlier in the day to discuss ideas on new images. Participants also discussed whether to impose stronger pictorial warnings on heat-and-burn electronic cigarettes, which have become popular recently.

Separate data from the Organization for Economic Cooperation and Development put the smoking rate of South Korean men aged 15 and older at 31 percent in 2015, the highest among 15 OECD countries surveyed. Japan came in second with 30 percent, followed by Italy with 25 percent.
(END)