SEOUL, Jan. 4 (Yonhap) -- The commanding general of the U.S. Forces Korea (USFK) on Thursday stressed the importance of combat readiness and unity among regional powers to cope with North Korea's recent peace offensive.

He said many people seem pleased by Pyongyang's recent diplomatic overture, referring to leader Kim Jong-un's New Year's Day statement that his country is willing to join the Winter Olympics that will open in the South Korean town of PyeongChang next month. He proposed immediate inter-Korean dialogue to discuss the issue. 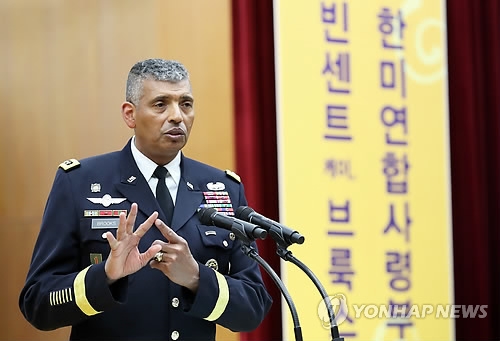 "We have to keep our expectations at an appropriate level," Gen. Vincent K. Brooks, who commands the U.S. Forces Korea (USFK), said at a lecture in Seoul.

In the face of the North's peace gesture, he said, it's important for South Korea and the U.S. to maintain an "ironclad and razor sharp" alliance and joint combat readiness in the event of a "negative outcome, not a positive outcome" of the current situation.

Hell-bent on provocative acts throughout last year, the North's aim was to create friction among five countries -- South Korea, the U.S., China, Japan and Russia, he said.

The five sides should respond to this strategy with greater harmony, like a fist rather than five separated fingers, he said.