WASHINGTON, Jan. 4 (Yonhap) -- The United States understands that possible talks between South and North Korea would be limited to discussing the upcoming Winter Olympics, not the nuclear weapons program of the communist regime, the State Department said Thursday.

South Korea and the U.S. have been in close consultation over the rare cross-border talks proposed for Tuesday, and the allies are "synced up very well," department spokeswoman Heather Nauert said.

Washington is reportedly concerned that Pyongyang may be trying to drive a wedge between the allies by expressing interest in dialogue amid toughened international sanctions over its nuclear and ballistic missile programs. 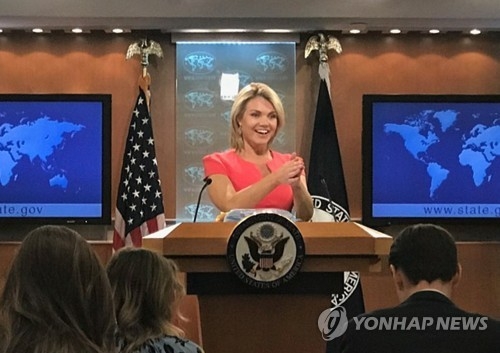 Pyongyang has yet to respond to Seoul's proposal for talks, which came in response to North Korean leader Kim Jong-un saying his country could discuss its possible participation in the Olympics in PyeongChang, South Korea, next month.

In a phone call earlier in the day, South Korean President Moon Jae-in and U.S. President Donald Trump agreed to postpone the allies' annual military exercises until after the games. Pyongyang has long denounced the drills as a rehearsal for invasion and sometimes staged missile tests in protest.

Nauert said the North's willingness to talk was an indicator of the success of the U.S.-led "maximum pressure" campaign, which has increased economic sanctions and further isolated the North to get it to abandon its nukes.

"We have information and evidence that the pressure campaign is really putting the squeeze to the money that the DPRK gets and has been using for its illegal nuclear and ballistic missile programs," she said, using an acronym for North Korea's official name, the Democratic People's Republic of Korea. "Without that maximum pressure campaign that is led by us, but many other countries are a part of it, we do not believe that that phone call would have been made."

On Wednesday, North Korea reopened a cross-border phone line inside the Koreas' shared village of Panmunjom after suspending it for nearly two years.

U.S. says inter-Korean talks would be limited to Olympics

U.S. says inter-Korean talks would be limited to Olympics