The country's current account surplus reached US$7.43 billion in November, down slightly from a surplus of $8.03 billion a year earlier, according to preliminary data from the Bank of Korea (BOK).

November was the 69th consecutive month of a current account surplus, which started in March 2012.

The services account deficit widened to $3.27 billion from $1.81 billion a year earlier due to a rise in overseas trips and foreign business services.

The number of outbound travelers rose 22 percent on-year to 2.23 million in November, while 1.12 million foreign visitors came to South Korea, down 16.5 percent from a year earlier. In particular, the numbers for Chinese tourists plunged 42.1 percent to 345,000 in the same month.

South Korea and China agreed in late October to put their bilateral relations back on a cooperative track, a move that could increase the number of Chinese tourists to South Korea moving forward.

"The lifting of the travel ban will likely bring about tangible results, such as an increase in Chinese visitors, from the new year," said Roh Cung-seak, director of the monetary and financial statistics division at the BOK. "When the on-year growth of Chinese tourists returns to positive terrain, South Korea's services account will improve." 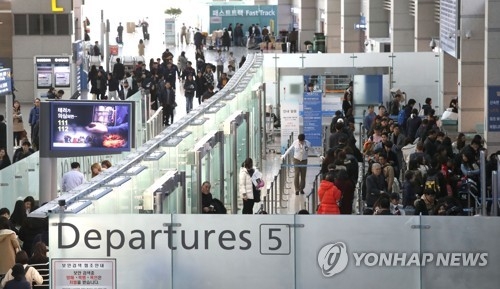 The primary income account swung to a deficit of $70 million in November from a surplus of $370 million a year earlier.