North Korea notified Seoul that it has accepted its recent offer to hold talks next Tuesday on the South Korean side in the truce village of Panmunjom, according to the Ministry of Unification.

"The main agenda items will include how to improve the two Koreas' relations including (the North's participation in) the Winter Games," Baik Tae-hyun, ministry spokesman at the ministry, told a press briefing.

He said that the two sides will discuss details needed for talks including the composition of delegates by exchanging documents.

Signs of a thaw in the long-stalled ties came as North Korean leader Kim Jong-un expressed a willingness to send a delegation to the Olympics to be held in the South next month in his New Year's message, a rare rapprochement to the South.

Seoul and Washington's recent decision to delay joint military drills until after the Games, confirmed by their presidents Thursday, appears to have prompted the North to accept the South's dialogue offer, experts say.

North Korea has long denounced the military drills as a war rehearsal and used them as an excuse for its provocations. The South and the U.S. said that the exercises are defensive in nature.

In his New Year's Day speech, Kim called on South Korea and the U.S. to suspend the military drills and halt Washington's regular deployment of strategic assets around the Korean Peninsula. His remarks were viewed as the North's preconditions for talks.

The government of liberal President Moon Jae-in hopes that better inter-Korean relations can help pave the way for the resolution of North Korea's nuclear issue and broader talks between the U.S. and North Korea.

Some experts said that the North's overture to South Korea may be aimed at weakening the united front in enforcing sanctions on Pyongyang and driving a wedge in the decades-long alliance between Seoul and Washington.

North Korea is under tough international sanctions over its nuclear and missile provocations including the sixth and most powerful nuke test in September last year and launches of three intercontinental ballistic missiles (ICBMs).

While extending an overture to Seoul, the North's leader warned the U.S. that a "nuclear button" is on his desk in his New Year's speech.

During a phone conversation, Moon and President Donald Trump agreed Thursday to continue the U.S.-led campaign of maximum pressure against North Korea and "not to repeat mistakes of the past."

"There is no change in the government's stance that along with efforts to restore inter-Korean ties, Seoul will consistently push for North Korea's denuclearization together with the international community," Baik said.

"We will prepare for talks, based on close coordination with the U.S. and relevant countries," he added.

Some experts said that if North Korean officials blacklisted in international sanctions come to the South as a delegate, it could be in violation of the sanctions regime.

"The government has a basic stance that it will prepare for the events in a way that North Korea's participation in the games does not violate international sanctions including Washington's unilateral punitive actions," the spokesman said. 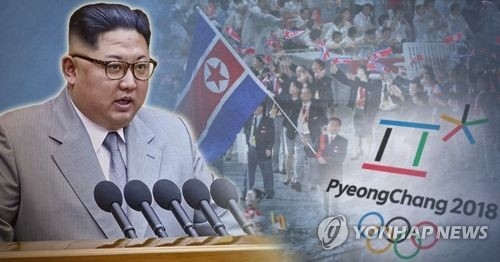