The data provided by SK Planet Co., the operator of local e-commerce platform 11st, showed that sales of such products on its website rose 29 percent on-year in 2017. The company declined to provide actual sales figures.

Sales of lipstick for children, for instance, skyrocketed 549 percent during the cited period, it said.

The sales of cosmetics for children on the online platform have been on the rise in recent years, recording 94 percent and 251 percent growth on-year in 2015 and 2016, respectively, the company said.

"The popularity of cosmetics, which have long been regarded as just for women, is expanding to include men and even children now," a SK Planet official said.

The South Korean government began monitoring children's cosmetics after adding the category to mandate that manufacturers label ingredients, including those that may cause allergies. But the category only includes lotion, cream and oil products, not color cosmetics.

A study posted on the website for the Korea Citation Index shows that 42.4 percent of elementary school students wear makeup and that 43.4 percent of respondents said they first started wearing makeup in the fifth grade.

The survey was conducted on 288 girls in the fourth, fifth and sixth grades at elementary schools in Seoul, Incheon and the southeastern industrial city of Ulsan from Nov. 14 to Dec. 9, 2016. 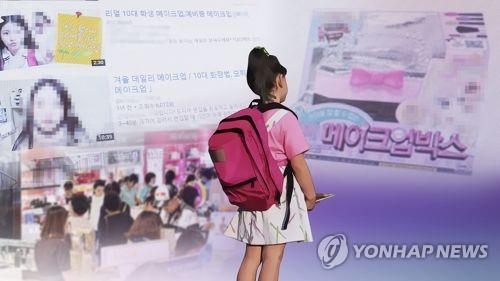 Sales of cosmetics for kids soar in S. Korea: data

Sales of cosmetics for kids soar in S. Korea: data