Hwacheon County, one of the coldest places in South Korea during the winter, heats up as a place of celebration at this time of year. 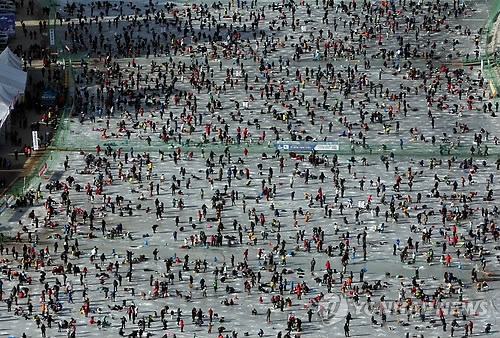 The town, described in numerical terms, is not what people would expect from the host of a big festival. The population is a mere 27,000, with 80 percent of its 909-square-kilometer area covered by rivers and mountains. Residents live on only 7 percent of the county's land area.

The area was the site of fierce battles during the 1950-53 Korean War, making the county the host of more military personnel than residents.

For the past 15 years, this small town about 120 km northeast of Seoul has hosted one of South Korea's main winter festivals, which now draws more than 1 million people. "Sancheoneo," a type of trout that lives only in clean fresh water, is let loose for fishing in a 1-kilometer-long ice field. 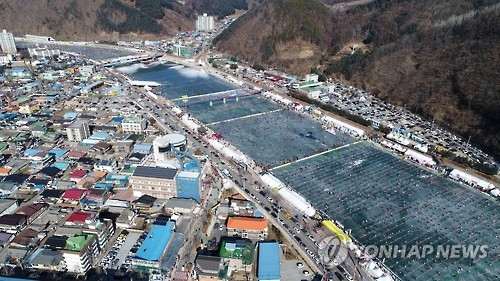 Photos of visitors fishing for sancheoneo through more than 10,000 holes, dug through ice measuring 30 centimeters thick, often make global news. Some visitors are spotted in short sleeves and short pants, while others jump into the freezing water to catch sancheoneo with their bare hands.

The festival also offers some 60 programs related to sports, games and cultural experiences.

The Hwancheon Sancheoneo Ice Festival was born out of county officials' yearning to revive the local economy, which relied mostly on soldiers and people coming to visit them.

Officials and residents worked together to pull off the miraculous feat. Multiple regulations blocking the county's development were advertised as having preserved the nearby natural mountains and rivers. 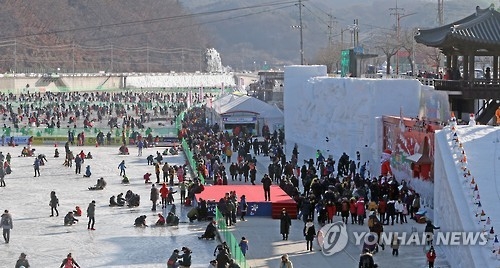 What used to be a local event became international. The festival made it onto the website of Time magazine in 2009. In 2011, it was named one of the "Seven Wonders of Winter" by CNN.

Some 102,000 foreigners came to the festival last year, the highest number so far. Hwacheon opened a duty-free shop at the festival site for the first time this year, to cater to these foreign visitors. The festival will also have souvenir shops with items related to the 2018 PyeongChang Winter Olympics, the first Winter games to be held in South Korea.

The festival has brought economic benefits beyond initial expectations. In 2006, the host began to issue gift certificates for locally produced agricultural products at county stores. The 2017 festival recorded 2.06 billion won (US$1.93 million) in profit. 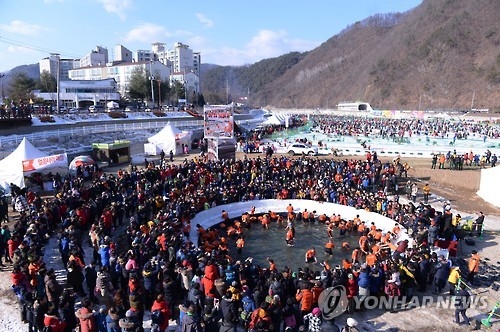 In the first year of the festival, direct economic benefit amounted to 2.3 billion won. Last year, it came to 97 billion won. Gift certificates amounting to 1.2 billion won are circulated every year.

The county's senior citizens earn money by making lamps in the shape of sancheoneo for the festival.

This year, more nighttime events have been added to attract festival visitors to the county's downtown area. The world's largest ice carving exhibit will be set up downtown, depicting well-known South Korean buildings. Santa Claus from Finland will return this year after making his first appearance last year, giving hope and dreams to children during the "Christmas in January" event from Jan. 12-14. 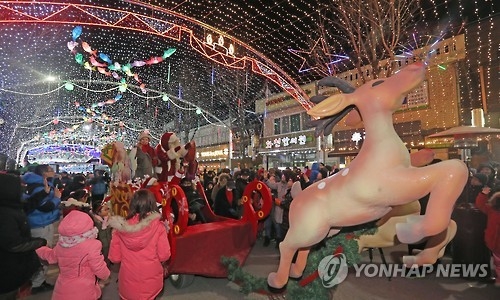 South Korea's culture ministry has designated the festival as the premier event representing the country for the fifth year in a row. It now ranks as the world's fourth most famous winter event, after Japan's Sapporo Snow Festival, China's Harbin International Ice and Snow Sculpture Festival, and Canada's Quebec Winter Carnival.
(END)