SEOUL, Jan. 5 (Yonhap) -- South and North Korea may discuss ways to improve ties but only after they first settle the issue of the North's participation in the PyeongChang Winter Olympics, presidential office Cheong Wa Dae said Friday.

"The priority is on North Korea's participation in the PyeongChang Olympic Winter Games," a ranking official told reporters on condition of anonymity.

"I believe there will be discussions related to improving South-North ties after the North's participation in the Olympics is finalized," the official added.

The remarks came shortly after North Korea agreed to hold an inter-Korean dialogue on Tuesday to discuss sending its delegation to the PyeongChang Games, which will be held from Feb. 9-25.

The inter-Korean talks, if held, will be the first since December 2015. 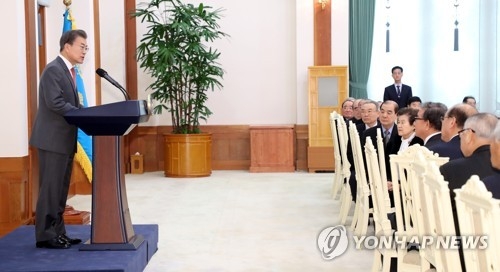 On Thursday, South Korean President Moon Jae-in and his U.S. counterpart Donald Trump agreed to postpone their countries' regular joint military exercises until after the end of the Winter Olympic Games in an apparent move to encourage North Korea's participation and reduce tensions during the event.

The Cheong Wa Dae official said the talks will only focus on the PyeongChang Olympic Games, at least for now, apparently to try to assure Washington that the upcoming inter-Korean dialogue will not discuss rewards for the communist state.

"Though the possibility of holding discussions on other issues remains open, I must say it is too early to predict how the dialogue will be held," he said.

President Moon said the South will not pursue inter-Korean dialogue just for the sake of holding talks with the reclusive North.

"I will not just naively push for dialogue as in the past. I will also seek to establish peace while pushing for dialogue based on strong defensive capabilities," the president was quoted as saying by his chief press secretary Yoon Young-chan. The remarks came during a meeting with members of the Korean Senior Citizens Association at his office Cheong Wa Dae on Friday.

In his telephone conversation with Trump, the South Korean president insisted that inter-Korean dialogue will only work to assist their allies' joint efforts to rid North Korea of nuclear weapons.