SEOUL, Jan. 5 (Yonhap) -- Opposition parties on Friday struck a cautious note on the upcoming inter-Korean talks over the North's possible participation in the PyeongChang Winter Olympics, expressing doubts over the reclusive state's intentions behind its peace offensive.

Seoul and Pyongyang agreed on that day to hold high-level talks next week, raising the prospect of a thaw in cross-border ties that have been strained amid the communist state's relentless provocations.

Kim Sung-tae, the floor leader of the main opposition Liberty Korea Party, reiterated that any inter-Korean dialogue must be based on Pyongyang's commitment to its denuclearization.

"High-level dialogue must be held, and we hope that it will be successful," Kim told reporters. "But a meeting only about the successful hosting of the PyeongChang Olympics without discussing the denuclearization issue will be meaningless." 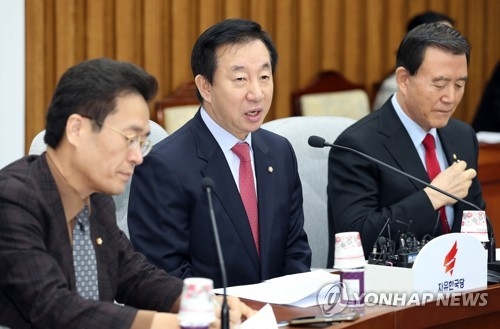 Conservative politicians here have raised concerns that the North may try to take advantage of its participation in the games to blunt the momentum for international sanctions, sow discord among South Koreans, and drive a wedge between Seoul and Washington.

Ahn Cheol-soo, the leader of the minor opposition People's Party, called for "caution."

"I am concerned about groundless optimism that is running on (about cross-border relations)," he said. "(The government) must first craft a strategy and then respond to the talks."

He added that once the high-level talks are held, Seoul must raise the issues of Pyongyang's nuclear and missile programs.

It also called for the opposition parties' support for Moon's efforts to improve ties with the North and warned that political disputes over Moon's approach to the North would worsen national division.