SEOUL, Jan. 5 (Yonhap) -- China's chief negotiator on the North Korean nuclear problem welcomed "positive" developments on the Korean Peninsula on Friday after the two Koreas agreed to hold talks next week to discuss the North's possible participation in the Winter Olympics, which will be held in South Korea soon.

Kong Xuanyou, assistant foreign minister, made the remarks at the start of a meeting with his South Korean counterpart Lee Do-hoon. He arrived in Seoul earlier in the day for a two-day stay, during which he is to meet South Korean officials for discussions on North Korea and issues of mutual concern.

"Currently, some positive things are unfolding with regard to the situation on the Korean Peninsula, though there are still complicated challenges," Kong said via an interpreter.

Kong said he hopes that the high-level inter-Korean talks will produce fruit quickly.

"We're talking with North Korea," he said. "We hope the dialogue between the Koreas run smoothly."

Kong added that he would like the upcoming Winter Olympic Games to be an opportunity to bring peace to the Korean Peninsula. The first Winter Games in South Korea will be held in PyeongChang, Gangwon Province, from Feb. 9 to 25.

"North Korea showed its intention to send a delegation to the Winter Olympics, and this is something we should welcome with open arms," he said. "South Korea and North Korea are compatriots of the same blood. We absolutely support (North Korea's PyeongChang Olympic participation) and we hope the two Koreas can continue exchanges even after the PyeongChang Olympic Games."

He also expressed the hope that Seoul and Beijing will strengthen strategic communication and advance mutual trust based on agreements their leaders reached during a summit in Beijing in December.

The agreement followed North Korean leader Kim Jong-un's overture for dialogue in his New Year's Day speech and subsequent action taken to restore a border communication line between the Koreas.

President Moon Jae-in earlier made it clear that improving inter-Korean relations should go along with efforts to denuclearize North Korea, and he called for increased efforts to closely coordinate with major powers. 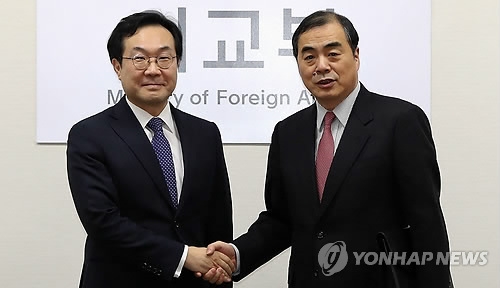 Moon and U.S. President Donald Trump on Thursday agreed to delay their countries' regular joint military exercises during the PyeongChang Olympics. The tentative agreement came at a request from Moon, according to the South Korean presidential office, Cheong Wa Dae.

Kong later said such agreement could be considered a "tentative dual suspension." China has been proposing the dual suspension of North Korea's nuclear and missile tests and the military drills held by Seoul and Washington as a solution to the nuclear issue on the Korean Peninsula.

When asked about the possible reopening of the six-party talks, Kong said: "We'll try our best, but only God knows if that will happen or not."

"I told Lim that China has taken legal action on this case," he said. "We believe the relevant authorities will handle this case based on facts and law."