SEOUL, Jan. 5 (Yonhap) -- South Korea's foreign minister has begun her efforts to listen to views from the victims of Japan's sexual slavery during World War II in a bid to determine the government's stance on a controversial deal with Japan over its wartime atrocities, a government source said Friday.

In December, after completing a monthslong review of the 2015 deal on the so-called comfort women issue, a foreign ministry task force concluded that there were procedural problems and that insufficient efforts were made to gather opinions from the aged victims and civic groups. 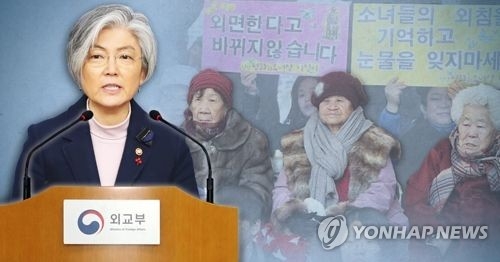 President Moon Jae-in said that the deal was "gravely flawed" and Foreign Minister Kang Kyung-wha pledged efforts to listen to views from those people before finalizing the government stance on the matter.

"Kang started to meet the victims, their families and supporting organizations today," the source said on condition of anonymity. "She will listen to their views intensively through this weekend."

The task force was launched under the Moon government, which took office in May, to review the almost two-year-old deal.

The government has said that it will seek a "two-track" approach in which it will separate the historical issue from its relations with Japan.

Japan has called for South Korea to faithfully implement the deal, saying that it is a government-to-government agreement.

Japanese Foreign Minister Taro Kono recently issued a written statement in which he called on South Korea to keep the agreement intact and said that any attempt to amend what was agreed upon "cannot be acceptable" and would make ties with South Korea "unmanageable."

On Thursday, President Moon invited some of the surviving victims to the presidential office for lunch and to console them.