PyeongChang 2018, the first Winter Olympics to take place in South Korea, will kick off 30 days from Wednesday. PyeongChang, some 180 kilometers east of Seoul in Gangwon Province, will be the main host, with a few events also set to be contested in its neighboring cities.

PyeongChang won the bid to host the 2018 Winter Olympics in July 2011, doing so on its third try after losing to Vancouver for 2010 and Sochi for 2014. The competition will be held from Feb. 9 to 25 under the slogan "Passion. Connected."

PyeongChang 2018 will be the first Olympics in South Korea since the 1988 Seoul Summer Games. 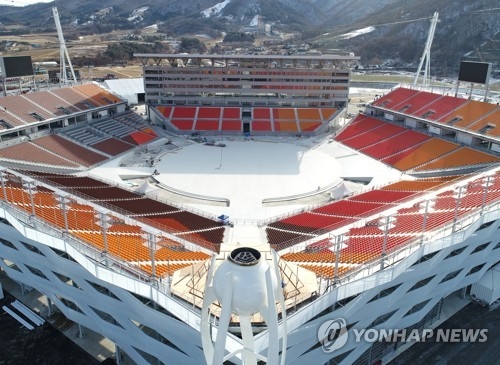 A dozen venues in PyeongChang and its sub-host cities of Gangneung and Jeongseon will stage seven sports across 15 disciplines, with 102 gold medals, a record for the Winter Olympics, at stake.

The PyeongChang Organizing Committee for the 2018 Olympic & Paralympic Winter Games (POCOG) estimates some 90 countries will send about 6,000 athletes and officials to participate.

The 12 venues are all located within 30 minutes of each other, and the compact venue concept helped PyeongChang win its bid in 2011.

Jeongseon Alpine Centre is the lone venue in Jeongseon, about 20 kilometers south of PyeongChang, and will host all alpine skiing races. 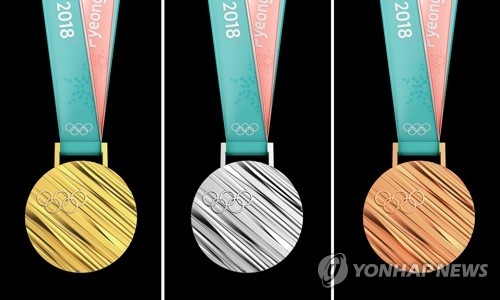 Six of the 12 venues have been newly constructed for the Olympics, while six existing facilities have been refurbished for the competition.

Other venues have staged several Olympic test events in sports, such as snowboarding, bobsleigh, skeleton, biathlon, ski jumping and curling.

South Korea has set out to collect up to 20 medals at PyeongChang 2018, including eight gold, and finish among the top five in the medal race for only the second time in its Winter Olympics history.

The host country is also hoping to be represented in all seven sports, with about 130 athletes in action. In Sochi four years ago, South Korea had 71 athletes in six sports.

All 26 Winter Olympic gold medals by South Korea have come from ice events -- short track, speed skating and figure skating. South Korea is once again expected to earn most of its medals from the ice, but is also eyeing potentially historic performances in skeleton and bobsleigh.

Representing the PyeongChang Olympics will be "Soohorang." It's modeled after a white tiger, a mythological guardian in Korean folklore.

"Sooho" means protection in Korean, and "rang" comes from the middle letter of "ho-rang-i," the Korean word for tiger. 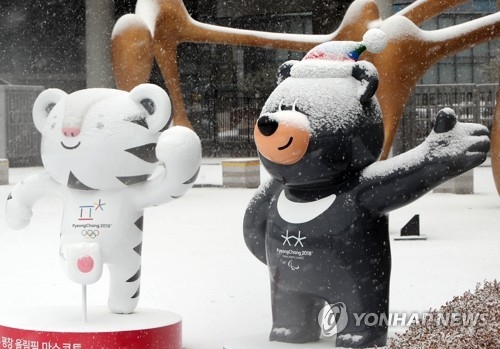 PyeongChang's torch relay began on Nov. 1, when the countdown to the competition reached 100 days.

The route will cover 2,018 kilometers -- the same number as the year in which the Olympics is taking place -- by plane, ship, train, sailboat, robot, cable car, bike and even zip line. When the relay is all said and done, the torch will have traveled through nine provinces, eight major cities, and 151 counties and districts.

The torch was built to withstand changing weather conditions during the relay. The combustion compartment with four separate walls prevents winds from blowing out the entire flame.

A pentagon-shaped hole in the bottom will help drain water out of the torch in rainy conditions. And a three-layered umbrella type cover will protect the flame against snow and wind.

The torch's white color was inspired by traditional Korean white porcelain and also by snow and ice, two major symbols of the Winter Olympics.

The five-angled shape in the middle of the torch's cap represents "the spirit of sports, which connects races, nations, religions, genders, cultures and the five continents around the world, uniting them with passion." 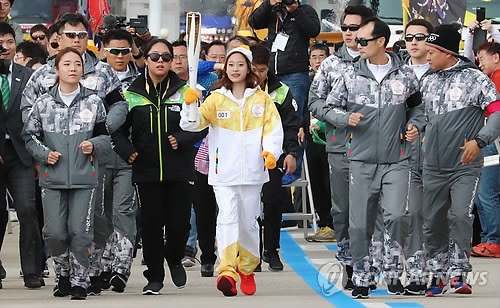 Medals to be awarded at PyeongChang 2018 have been inspired by the Korean alphabet hangeul. Gold, silver and bronze medals, designed by local industrial designer Lee Suk-woo, feature hangeul consonants on their bodies.

Those consonants are "ㅍ, ㅊ, ㄷ, ㅇ, ㄱ, ㄹ, ㅁ," representing the Korean words for the PyeongChang Winter Olympics. They were written and stretched in 3-D and formed together in a cylinder shape.

The gold medal weighs 586 grams, the silver 580g and the bronze 493g. Compared with Sochi 2014, PyeongChang's gold and silver medals are heavier, and bronze medal is lighter.

The gold and silver medals for PyeongChang are 99.9 percent silver, and the gold medal is plated with 6g of gold. The bronze medal is made of red brass.

PyeongChang said it will create 259 sets of the medals. Of them, 222 of them will be awarded to the medal winners at the Olympics, and five sets will be set aside in case of ties. The IOC will retain 25 sets for display overseas, and seven other sets will be exhibited in South Korea.