The star athlete and the popular TV personality exchanged vows in a private ceremony at Shilla Hotel in Seoul. Kim In-sik, Ryu's former manager in South Korea with the Hanwha Eagles, was the officiant and Yoo Jae-suk, one of South Korea's biggest celebrities, served as the master of ceremonies.

Ryu and Bae thanked the guests for celebrating their marriage with them and for their encouragement for their new start.

"The year 2018 will have a bigger meaning than any other year," they said. "We'll be warm companions for each other, a husband and a wife who always think positive, and two people who will give their best for each other."

Bae, also 30, is a former model who has been hosting nightly baseball highlight shows on cable television for several years. 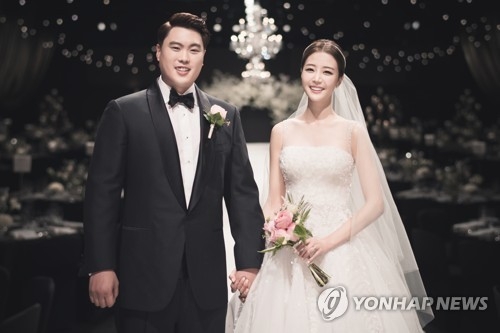