The pledge came in a special meeting with leaders of the Korean Senior Citizens Association at the presidential office Cheong Wa Dae.

"I offer my respect and appreciation to each and every senior citizen in the Republic of Korea for helping to establish the strong foundation of economy and democracy," the president said, according to Cheong Wa Dae pool reports.

"This year, we will work to further develop the Republic of Korea and improve the lives of each and every citizen. Also, we will work to build a nation where the elderly are more respected and well-treated," he added. 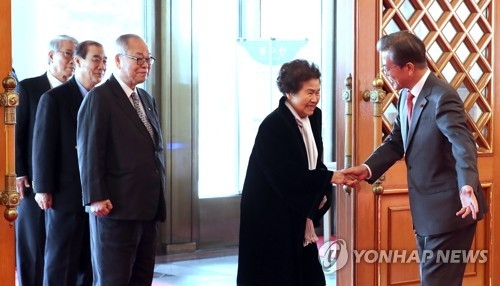 The liberal president is widely considered less popular among older generations, which are often considered conservative in a country that suffered a war with the communist North Korea and has a long history of military dictatorship.

"The senior citizens may have had much to worry about last year. But I believe it was a process for our nation to straighten up as if a tree takes firmer root in strong wind and rain," the president told the meeting.

Moon came into office in May after winning a rare presidential by-election caused by the ouster of his conservative predecessor Park Geun-hye over corruption and influence-peddling allegations.

The president insisted the country was finally put back on the right track, noting the country's economy is estimated to have expanded 3 percent on-year in 2017, the fastest clip in three years.

He said the government will focus on sharing the benefits of such growth with all people, including seniors, this year.

"There are still many areas the government has not been able to reach. That is why we need the help of elders at the association," he said. "I ask you elders to continue leading us in the new year as the nation's elders."