PYEONGTAEK, Gyeonggi Province, Jan. 5 (Yonhap) -- Lt. Gen. Michael A. Bills on Friday assumed the duty of the commander of the Eighth Army, the backbone of U.S. Forces Korea (USFK), with a pledge to do his best to maintain the "fight tonight" posture.

The change of command ceremony was held at the Collier Fitness Center in Camp Humphreys, the unit's new home, about 70km south of Seoul.

Bills, formerly the USFK's operations officer, emphasized the need to develop the alliance through teamwork.

Among the attendees at the ceremony were USFK commander Gen. Vincent K. Brooks, Gen. Robert B. Brown, commander of U.S. Army Pacific, and Gen. Kim Byeong-joo, deputy chief of the Combined Forces Command. 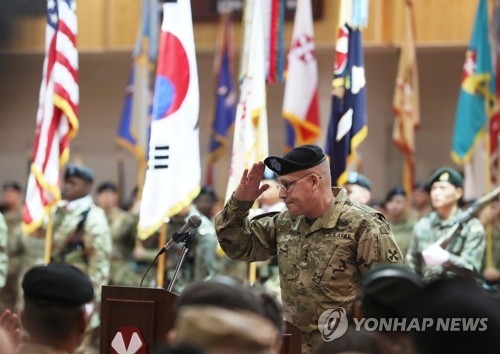