PAJU, South Korea, Jan. 5 (Yonhap) -- South Korea on Friday confirmed the lineup of its under-23 football team that will compete in a continental tournament in China this month.

The Korea Football Association announced the squad of 23 players who will represent South Korea at the Asian Football Confederation U-23 Championship. The biennial competition is scheduled from Tuesday to Jan. 27 in Jiangsu Province, China.

The men's team, led by head coach Kim Bong-gil, includes 13 players who have made pro debuts with K League clubs. Hwang Ki-wook of Belgian side AFC Tubize and Park In-hyeok of Serbian club Vojvodina are the only two based in Europe. 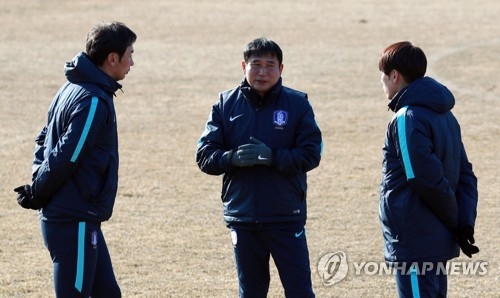 At the 16-team tournament, South Korea is with Vietnam, Syria and Australia in Group D. The top two teams from the group will advance to the knockout stage.

South Korea finished fourth in the 2013 tournament and second in 2016. Kim said the goal is to lift South Korea's first U-23 championship trophy.

"All coaches at the tournament are going for the title," Kim said before training at the National Football Center in Paju, north of Seoul. "We'll first try to reach the semifinals and then go for the championship."

South Korea will have their opening match against Vietnam next Thursday. Vietnam are currently led by South Korean coach Park Hang-seo.

"Vietnam are fast and they have good counterattacks," he said. "But I believe they have some defense problems, so we'll play a high-pressing game."

Kim's team will face Syria on Jan. 14 and play their final group stage match against Australia on Jan. 17.

"Most of Syria's under-23 players play for their senior national team," he said. "Australia are a physical team, since they have many players who are with European clubs."

After the Asian Championship, Kim faces another daunting task: to try to win a gold medal at the Asian Games in Indonesia this summer. South Korea are the defending champions of the quadrennial event. 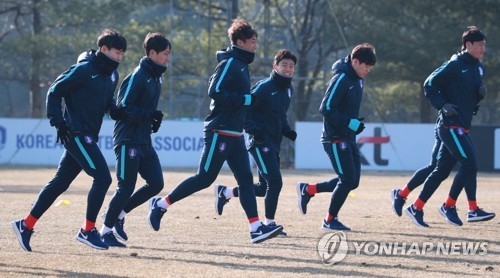 Like at the Olympic Games, the men's football tournament at the Asian Games is open to players under 23, but teams can also field up to three players who are over the age limit, called wild cards.

In South Korea, male athletes who earn an Olympic medal or win gold at the Asian Games are exempted from the country's mandatory two-year military service. This can be beneficial to professional athletes' careers and their teams' prospects.

While Tottenham Hotspur's Son Heung-min, 25, is regarded as a possible wild card selection, Kim said he will take some time to think about it.

"I want to call up many Europe-based players in March and June," he said. "I want to pick players who are mentally strong and work hard."

S. Korea unveils its under-23 team for AFC championship

S. Korea unveils its under-23 team for AFC championship