SEOUL, Jan. 5 (Yonhap) -- A political dispute over the presidential chief of staff's recent visit to the United Arab Emirates (UAE) escalated Friday, with opposition parties seeking a parliamentary probe and the ruling party dismissing the move as politically motivated.

Speculation about Im Jong-seok's visit to the UAE last month has reached fever pitch. Some argue that his trip was to allay the UAE's concerns about the impact of President Moon Jae-in's energy policy on bilateral deals to build and manage nuclear reactors. Others even claim his visit was about a "secret" pact on military cooperation.

Rumors have further escalated amid shifts in the presidential office's explanations. The office initially said his trip was arranged to encourage South Korean troops there. Then it said the trip was to restore bilateral ties strained by the former Park Geun-hye administration. Still later it said the trip was to deliver Moon's handwritten letter aimed at strengthening the countries' two-way partnership.

Kim Dong-cheol, the floor leader of the minor opposition People's Party, pressured Im to attend a session of the parliament's steering committee to give a clear explanation about the purpose of his visit to the UAE.

"Speculation over Im's visit to the UAE is snowballing. ... The presidential office Cheong Wa Dae has courted (the controversy)," Kim said during a meeting with senior party officials. 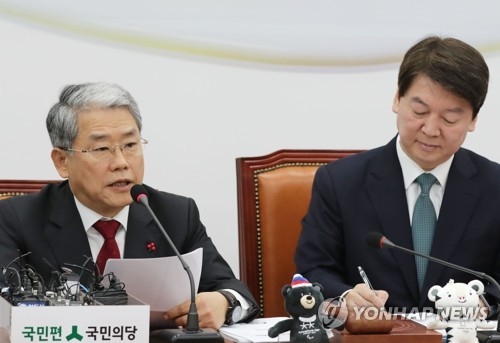 Kim Sung-tae, the floor leader of the main opposition Liberty Korea Party, reiterated that he would seek close coordination with other opposition parties to verify the truth behind Im's suspicious visit.

"We will address citizens' speculations by mobilizing all capabilities of the National Assembly, including the parliamentary investigation," he said.

The minor opposition Bareun Party was poised to submit a formal request for a parliamentary probe into the case, saying the legislature must uncover the truth.

The ruling Democratic Party hit back swiftly, saying the call for a parliamentary probe was nothing but a political offensive. It also warned that the burgeoning dispute over the diplomatic issue could undermine South Korea's national interests.

"This issue must be approached from the standpoint of national interests and mutual trust," a ruling party official told Yonhap News Agency, declining to be named.

"Since opposition parties raised the issue as part of their political offensive, we think their call for convening the parliamentary steering committee to question Im is unworthy of any comment," the official added.