Cho Myoung-gyon, the country's top pointman on unification, said that the two Koreas will likely first focus on discussing the North's participation in the PyeongChang Winter Olympics.

"It is good that the resumption of inter-Korean talks could set the tone for an improvement in ties between the two Koreas, and better relations could become a small catalyst for helping resolving the North Korean nuclear issue," Cho told a group of reporters.

The two Koreas agreed Friday to hold talks on Tuesday at the truce village of Panmunjom on the border bisecting the Korean Peninsula, according to Seoul's unification ministry. 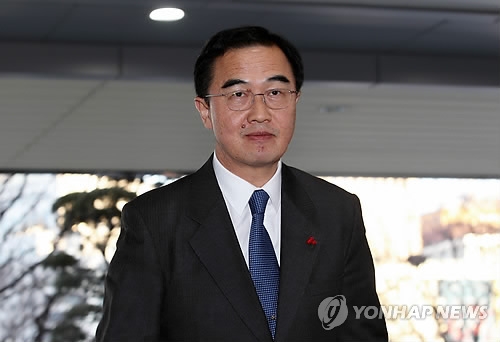 North Korean leader Kim Jong-un said in his New Year's speech that he is willing to send a delegation to the Winter Olympics to be held in the South on Feb. 9-25, a rare rapprochement with Seoul after years spent ignoring the South.

Seoul proposed Tuesday holding high-level talks in response to Kim's message that he is open to dialogue. A day later, the North reopened a cross-border hotline after a nearly two-year suspension.

If the land route across the heavily fortified border is chosen, there should be consultation between the military authorities of the two Koreas.

If the North sends a cheering squad or a performing arts and singing team, both sides also should consult over details such as travel route, accommodation and security issues.

The cost of accommodation and other expenses may be dealt with in the discussions. The International Olympics Committee (IOC) said that it is willing to pay costs for the North's athletes if Pyongyang takes part in the games.

"The government's basic stance is that it will prepare for the events in such a way that North Korea's participation in the games does not violate international sanctions, including Washington's unilateral punitive actions," Baik Tae-hyun, ministry spokesman, told a press briefing.

Asked whether he will become the chief negotiator, the minister said that relevant government agencies are in consultation on the matter, without elaborating further.

It is likely that Cho would become the South's chief delegate opposite Ri Son-gwon, chairman of the Committee for the Peaceful Reunification of the Country (CPRC), North Korea's state agency in charge of inter-Korean affairs.

Cho, 61, is a veteran negotiator for inter-Korean dialogue and has extensive experience. He played a key role in preparing for a summit between the two Koreas in 2007 during a former liberal government.

Ri announced Wednesday that the North's ruler ordered the reopening of a suspended cross-border hotline at the truce village, vowing that North Korea will have inter-Korean talks in a sincere manner.