According to the ministry, Lim emphasized the need for a thorough and quick investigation, as well as for follow-up measures on the case. Kong replied that suspects are currently being detained and the case will be handled on a legal footing. 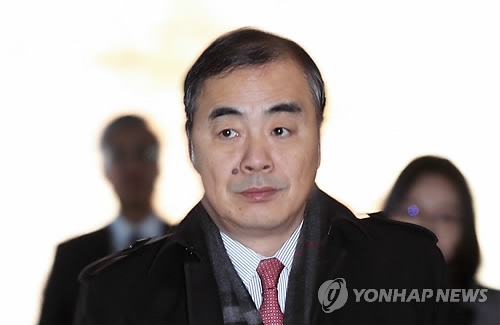 On Dec. 14, Chinese security guards beat and injured two South Korean photojournalists who were covering a business function attended by President Moon Jae-in hours before his summit with Xi Jinping.

One of them took a severe beating while completely surrounded by the guards despite strong protests from his colleagues and South Korean officials, including those from the presidential office Cheong Wa Dae. He was taken to a hospital for treatment.

The ministry said this was the first time that a high-ranking Chinese envoy expressed regret at the assault case at an official meeting.

The ministry added that Kong and Lim agreed Moon's visit to China last month was successful and that the two sides will further pursue measures to expedite exchanges between the two nations.

Lim and Kong also reaffirmed bilateral cooperation between the two countries for the success of the 2018 PyeongChang Winter Olympics Games in South Korea.

The ministry said that they also touched on issues relating to North Korea and peace on the Korean Peninsula.