In an interview with CNN, the top U.S. diplomat was commenting on President Donald Trump's recent tweet, in which he boasted about having a "nuclear button" that is "much bigger and more powerful" than the one allegedly sitting on North Korean leader Kim Jong-un's desk.

"I think the rhetoric that North Korea understands is that while it is our objective, and the president's been very clear, to achieve a denuclearization through diplomatic efforts, those diplomatic efforts are backed by a strong military option if necessary," he said. "That is not the first choice and the president's been clear that's not his first choice, but it is important that North Koreans as well as other regional players understand how high the stakes are, in an effort to ensure our diplomatic efforts are fully supported."

Washington has led a "maximum pressure" campaign of increasing economic sanctions and diplomatic isolation to force Pyongyang to abandon its pursuit of nuclear-tipped ballistic missiles capable of striking anywhere in the U.S. 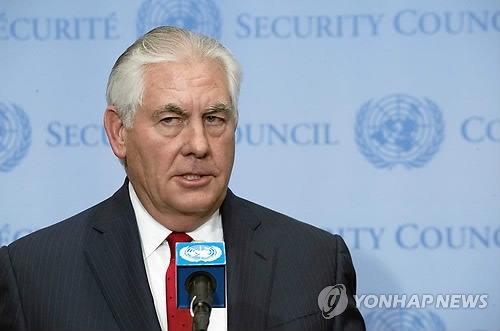 Last year, the U.N. Security Council unanimously adopted three sets of sanctions aimed at depriving the communist regime of the fuel and revenue to develop its weapons. Tillerson also noted that some countries have imposed unilateral sanctions and scaled back diplomatic ties.

"I think it is a recognition that the president has demonstrated to the world how high the stakes are. That's why we must achieve a diplomatic outcome," he said.

"The North Koreans have to understand that the penalties to them will continue and will only grow more severe in terms of sanctions actions and other actions until they do get on a pathway to achieve that objective that the entire world hopes to achieve," he said, referring to the aim of denuclearizing the country.

In a possible sign of a thaw in inter-Korean relations, the two Koreas are set to hold high-level talks Tuesday to discuss the North's potential participation in the Winter Olympics in PyeongChang, South Korea, next month.

Tillerson said it's too early to say whether that will lead to talks between the U.S. and North Korea or on denuclearization.

"We need to wait and see what the outcome of their talks are," he said. "I know some are speculating that this might be their first effort to open a channel, but as you know, we've had channels open to North Korea for some time, so they do know how to reach us if and when they're ready to engage with us as well."

Tillerson surprised many last month when he offered to hold talks with North Korea without precondition, a proposal he backtracked on after apparent objection from the White House.

He made clear Friday that complete, verifiable and irreversible denuclearization will have to be the aim of any dialogue.

"We clearly need a signal from North Korea that they understand these talks must lead to that conclusion," he said. "The pathway of how you get there, that is the nature of a negotiation. There'll be some give and take to achieve those objectives. So that objective has never changed."