SEOUL, Jan. 6 (Yonhap) -- Celltrion Inc., a South Korean pharmaceutical firm currently listed on the tech-heavy KOSDAQ market but that aims to jump to the main bourse in the near future, saw its market capitalization reach closer to that of Hyundai Motor Co. this week, data showed Saturday.

On Friday, Celltrion closed at 266,900 won (US$250) on the secondary market, with its market cap reaching 32.7 trillion won. The figure hovers above that of POSCO, South Korea's top steelmaker, which is in the fourth spot on the main bourse at 32 trillion won.

Market watchers said that in the near future the market cap of Celltrion may surpass that of No. 1 carmaker Hyundai Motor, which currently occupies the third spot of the main bourse with 32.8 trillion won.

"The company plans to release Herzuma in the first quarter, and it is expected to win approvals for Truxima and Herzuma in the North American market, as well, in the second quarter," said Kang Yang-koo, a researcher at HMC Investment Securities, suggesting the outlook for the firm remains bright.

Both drugs are biosimilars. Herzuma is used to treat breast cancer, and Truxima is applied in cases of patients with non-Hodgkin's lymphoma, chronic lymphocytic leukemia and rheumatoid arthritis.

Celltrion is in the process of relocating to the main bourse and may be listed there as early as February. 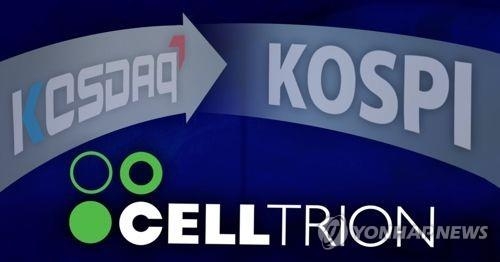