With a combined time of 1:54.28 after two runs, Yun defeated Alexander Tretiakov of Russia by 0.39 second. 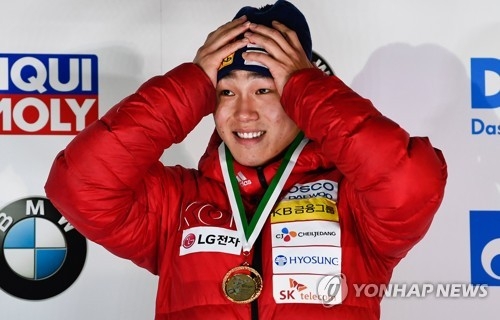 Yun had the fastest time in the first run at 57.24 seconds and outdid himself in the second run with 57.04 seconds.

With the 2018 PyeongChang Winter Olympics about a month away, Yun, a virtual no-name just a few years ago, has emerged as the heavy gold medal favorite.

After opening the World Cup season with a silver medal in Lake Placid in the United States in November, Yun reeled off three consecutive victories in Park City in the U.S., Whistler in Canada and Winterberg in Germany from mid-November to early December.

After a runner-up finish in Austria's Innsbruck last month, Yun returned to the top of the podium in Altenberg, which is considered the most challenging track on the World Cup circuit.

Yun had never finished higher than fifth at Altenberg in his three previous appearances there.

Yun's continued ascendency has coincided with the unexpected struggles of Martins Dukurs of Latvia, thought by many to be the greatest skeleton slider in history.

Dukurs is a five-time reigning world champion and has finished first overall in each of the past eight World Cup seasons. Yun finished second overall behind the Latvian in both 2016 and 2017, but the table has turned this season. 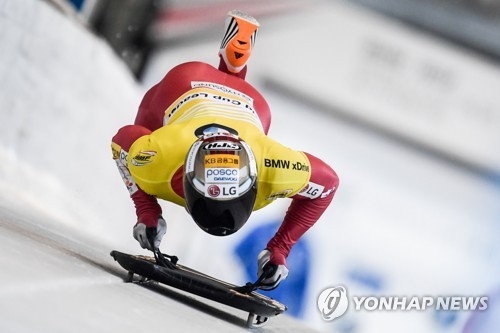 Dukurs does have two victories this season, but he has also finished sixth once and ranked only fifth this week, 1.21 seconds behind the South Korean.

There are two World Cups remaining this season -- at St. Moritz, Switzerland, next week and back in Germany in Konigssee the following week. Yun plans to skip the final leg so he can practice more at the Olympic Sliding Centre in PyeongChang before the Olympics.

Yun leads Dukurs in World Cup points by 1,320 to 1,230. Dukurs may well overtake Yun to capture his ninth straight World Cup overall crown, but Yun will have a bigger prize on his mind -- his first Olympic gold.