SEOUL, Jan. 6 (Yonhap) -- A Pyongyang scholar has insisted that the North Korean economy remains on the path to sustained growth despite toughened international sanctions, a pro-North newspaper published in Japan reported earlier this week.

"The North Korean economy is steadily taking the path towards improvement, rather than deterioration, thanks to various measures to enhance its economic independence," Kim Chol, head of an economic research center affiliated with the North's Academy of Social Sciences, claimed in an interview with the Chosun Sinbo printed on Friday. 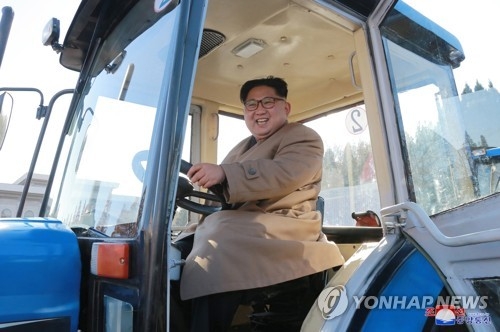 The scholar then praised North Korean leader Kim Jong-un's policies of localization and normalization of industry, while downplaying the impact of rounds of United Nations economic sanctions over its nuclear and missile provocations.

"At the time of the 'Arduous March' of the 1990s, imports of raw materials and components were inevitable as local production was not normalized. Today, however, localization is in full swing and is normalizing the abnormality," said the scholar.

In particular, he noted there are lots of enterprises that produce remarkable outcomes from active and creative management activities.

The U.N. Security Council unanimously passed toughened sanctions against North Korea last month over its test of an intercontinental ballistic missile on Nov. 29. The sanctions are expected to cut North Korea's foreign currency revenue from exports by approximately US$250 million a year.

In the face of toughened sanctions, North Korean leader Kim called for economic self-reliance and independence in his new year address.

Scholar Kim, dismissing any negative impact from the U.N. sanctions, said that the North's net income is steadily rising thanks to increased business to business transactions.

"Under the socialist responsible management system, enterprises conclude and implement mutual contracts. As the hostile nations toughen sanctions against us, business to business transactions of new products increase, contributing to a rise in social net incomes," said scholar Kim in the interview.

He also talked about the North's industrywide efforts to scale down its dependence on petroleum and at the same time increase the use of coal in the energy sector.
(END)