WASHINGTON, Jan. 5 (Yonhap) -- South Korea and the United States held their first meeting Friday to discuss amendments to their free trade deal as Washington pushes to reduce its trade deficit with the Asian country.

Each side raised issues pertaining to the revision and implementation of the Korea-U.S. free trade agreement, known as KORUS, including "sensitive areas," South Korea's trade ministry said in a statement. 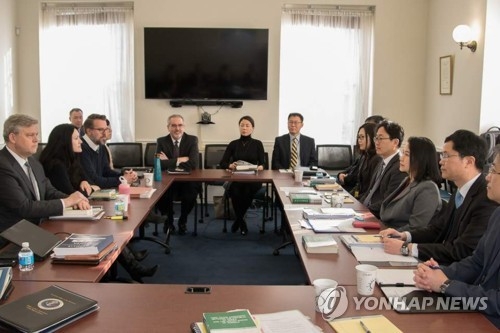 The South Korean side, in particular, noted its interest in resolving issues over the investor-state dispute settlement (ISDS) clause and trade remedies. With the ISDS provision, investors can sue countries for alleged discriminatory practices through international arbitration bodies.

On issues raised by the U.S., South Korea "actively" expressed its position, the ministry said without elaborating.

The renegotiation follows U.S. President Donald Trump's blaming of the six-year-old deal for his country's growing trade deficit with Asia's fourth largest economy. But Seoul has pointed to macroeconomic factors and the U.S. surplus in services trade.

Washington has called for better access to South Korea's auto market, among other items.

The two sides agreed to continue talks based on Friday's meeting and to determine the date for a second round of negotiations soon, the ministry said.

"The government plans to thoroughly prepare for the next round of negotiations by collecting the opinions of stakeholders and experts and drawing up a joint strategy with relevant ministries," it added.

The meeting was led on the South Korean side by Yoo Myung-hee, director-general of the ministry's trade policy bureau, and on the U.S. side by Assistant Trade Representative Michael Beeman.

During the day-long session, the U.S. side called for easier access to the South Korean market, as well as improvements in other trade barriers.

"The United States discussed proposals to move towards fair and reciprocal trade in key industrial goods sectors, such as autos and auto parts, as well as to resolve additional cross-cutting and sector-specific barriers impacting U.S. exports," USTR said in a release.

At the conclusion of the session today, Ambassador Robert Lighthizer said, "We have much work to do to reach an agreement that serves the economic interests of the American people."

Lighthizer said the U.S. wants "fair and reciprocal trade" between the two nations and vowed to "move forward as expeditiously as possible to achieve the goal."