SEOUL, Jan. 6 (Yonhap) -- South Korea's auto industry is expected to feel the pinch of potential changes as it became the first target of renegotiation of the free trade agreement (FTA) with the United States, industry officials said Saturday.

In the first round of talks on amending the five-year-old deal Friday, U.S. negotiators raised issues related to autos and automotive parts, sources said. Details of the demands made were not disclosed by the two sides.

"The United States discussed proposals to move towards fair and reciprocal trade in key industrial goods sectors, such as autos and auto parts, as well as to resolve additional cross-cutting and sector-specific barriers impacting U.S. exports," the United States Trade Representative said in a release.

Seoul officials have anticipated increased pressure on the auto industry, which takes up a large part of the trade surplus with the U.S. About 80 percent of South Korea's trade surplus came from the auto sector in 2016. 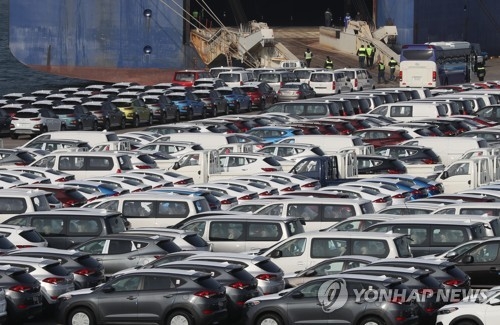 While the FTA has boosted auto trades between the nations, South Korean companies have enjoyed greater benefits thanks to the bigger size of the U.S. auto market, which is about 10 times that of the Korean market.

The U.S. market in 2016 accounted for 30 percent of auto exports for Hyundai Motor Co., South Korea's top automaker, and its sister company, Kia Motors Corp. Together, the two companies, which belong to Hyundai Motor Group, constitute the fifth-largest automaker in the world in terms of sales.

Industry officials said the percentage of U.S. auto parts used by South Korean carmakers could become an important issue. This is also a thorny subject for the U.S. in the ongoing North American Free Agreement negotiations with Canada and Mexico.

With no tariffs levied on South Korean auto parts shipped to the U.S., local carmakers with assembly lines in the U.S. can pick whatever components they want to put into cars assembled in the world's No. 1 economy. The existing FTA has no specific clause on this issue.

Local automakers have expressed concerns that any changes to the rules of origin could compel them to import and use parts they don't really need and hurt local parts manufacturers.

Currently, the percentage of auto parts used in cars sold in the U.S. varies depending on the model.

According to the National Highway Traffic Safety Administration data, U.S. parts make up 51 percent of Santa Fe Sport SUVs made by Hyundai Motor Co., while the corresponding figure for the Optima, made by Hyundai's sister company Kia Motors Corp., is 83 percent or greater. Some models made in South Korea and shipped abroad do not use U.S. parts at all.

Some think Washington could also demand raising the 25,000-unit threshold for U.S. car shipments to South Korea that can enter the country without meeting domestic industry regulations and easing vehicle emissions standards, which U.S. automakers view as non-tariff barriers.

"While the U.S. could try to ease South Korea's emissions standards for American vehicles, it is a highly sensitive issue because giving preferential treatment to a certain country would lead to discrimination against other nations," said a ministry official who asked for anonymity. "It also goes against the government's efforts to cut carbon emissions."

The Ministry of Trade, Industry and Energy said it will reflect opinions from industry officials and related organizations in regard to the U.S. proposal to prepare the next round of negotiations.