Jan. 7 (Yonhap) -- President Moon Jae-in on Sunday watched a popular movie about a historic pro-democracy movement in 1987, in which he himself played a leading role as a human rights lawyer.

The movie, "1987: When the Day Comes," depicts the landmark year in South Korea's struggle for democracy from the torture death of a university student to a massive protest across the country in June calling for an end to a military-backed government.

Chun Doo-hwan, a general-turned-president, bowed to the protesters, agreeing to a constitutional revision for a direct presidential election.

For Moon, the movie was a reminder of his grueling fight in the 1970s against dictator Park Chung-hee who ruled the country with an iron fist for 18 years. He was jailed in 1975 for joining a pro-democracy campaign.

Moon also led the June 1987 uprising in the southern city of Busan, along with the late President Roh Moo-hyun, when they were human rights lawyers.

The movie premiered on Dec. 27 and had attracted more than 3.66 million viewers as of Saturday. 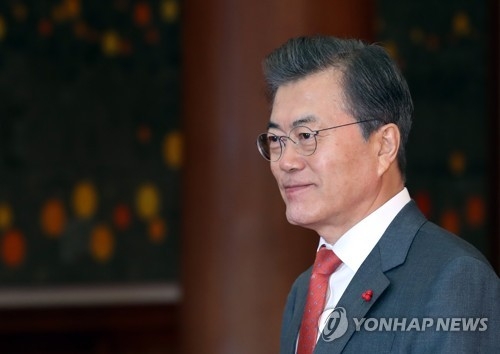