SEOUL, Jan. 7 (Yonhap) -- North Korea notified the South on Sunday that it will send a five-member delegation led by Ri Son-gwon, point man on inter-Korean affairs, to high-level talks to be held this week, Seoul officials said.

The two Koreas agreed Friday to hold their first formal talks in more than two years Tuesday at the border village of Panmunjom to discuss Pyongyang's possible participation in the Feb. 9-25 PyeongChang Winter Olympics.

In response, the North sent a message that it will also dispatch five representatives led by Ri, chairman of the Committee for the Peaceful Reunification of Korea (CPRK), a state agency in charge of inter-Korean affairs, according to South Korea's unification ministry.

Ri is known as a veteran negotiator with much experience in inter-Korean talks. He has lead the North's delegations for various cross-border military talks since 2006, when he started representing Pyongyang at working-level dialogue sessions with the South.

He is considered a right-hand man of Kim Young-chol, the vice chairman of the Central Committee of the Workers' Party and chief of the United Front Department. Kim is known to have orchestrated the 2010 torpedo attack on the South Korean corvette Cheonan that killed 46 sailors.

The upcoming talks have raised hopes for a thaw in the bilateral relations that have been strained amid Pyongyang's continued provocations, such as its nuclear and long-range missile tests last year.

Seoul hopes the talks provide a catalyst to mend ties and resume cooperation, despite concerns that the North could use the sporting event to blunt the momentum for global sanctions and drive a wedge between Seoul and Washington.

Initially, there was a controversy over whether the CPRK, once an offshoot of the North's ruling Worker's Party, can be a counterpart to Seoul's unification ministry. But Seoul believes the CPRK can be seen as equivalent to the unification ministry as it was elevated to a state agency in June 2016.

"We believe that the South and North have finalized the organization of their delegations in a balanced way," a Seoul official said, declining to be named.

He added that at the upcoming talks, the two sides will also discuss ways to improve cross-border relations "if possible."

Seoul officials said that the two sides will continue discussions to fine-tune details of the high-level meeting, including the exact time schedule. 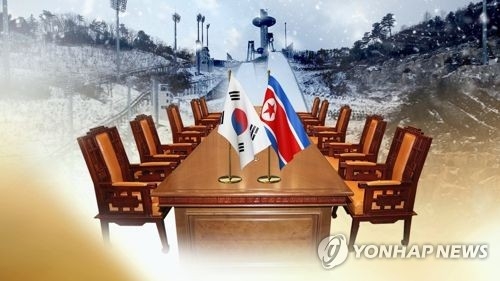