Cha, 16, won the men's singles at the Korea Figure Skating Championships, which doubled as the third and final leg of the Olympic trials, at Mokdong Ice Rink in Seoul, with the overall score of 252.65 points. He scored 168.60 points in free skate, adding to 84.05 points from Saturday's short program.

With that, Cha won the qualification stage with 684.23 points, nipping Lee June-hyoung by 2.13 points. Only one Olympic spot in the men's singles was up for grabs.

Lee had won the first two qualification events and held a 20.29-point lead over Cha heading into Sunday's free skate. But he finished the Korea Figure Skating Championships in second place with 222.98 points, after earning just 146.18 points in free skate. 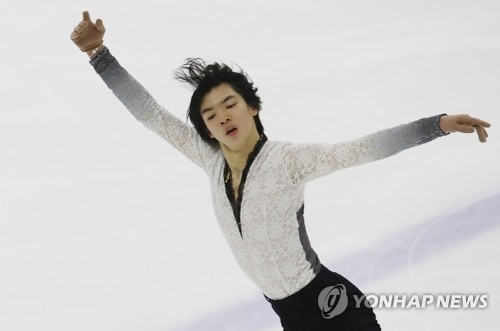 Cha, who finished third at the International Skating Union (ISU) Junior Grand Prix Final last year, made some last-minute change to his programs for this competition, and the move paid dividends.

He went back to his free skate routine from last season and attempted only one quadruple jump, instead of two. Cha has experienced ankle and hip pains while working on his quadruple jumps and decided to reduce the risky element for a shot at the Olympics.

Cha opened his free skate with a clean triple lutz-triple toe loop combination and pulled off a flawless quadruple salchow, his only quad jump of the day.

Cha followed it up with a perfect triple axel-double toe loop combination and was mistake free the rest of his program, which Cha capped off with a step sequence, triple loop and change of foot combination spin.