SEOUL, Jan. 7 (Yonhap) -- South Korea's top nuclear envoy is considering visiting the United States as early as this week to explain the outcome of the planned cross-border dialogue over Pyongyang's possible participation in the PyeongChang Winter Olympics slated for next month, sources said Sunday.

Should he visit Washington, Lee Do-hoon is expected to meet with his U.S. counterpart Joseph Yun, to discuss the results of high-level inter-Korean talks, set to take place on Tuesday, and explore ways to resume denuclearization dialogue.

The upcoming talks between the two Koreas have raised hopes for a thaw in the inter-Korean ties that have been frayed by Pyongyang's unceasing provocations, including nuclear and long-range missile tests last year.

But conservatives here have voiced concerns that the reclusive state could use the talks to drive a wedge between Seoul and Washington and blunt the momentum for international sanctions designed to bring it to the talks on its denuclearization. 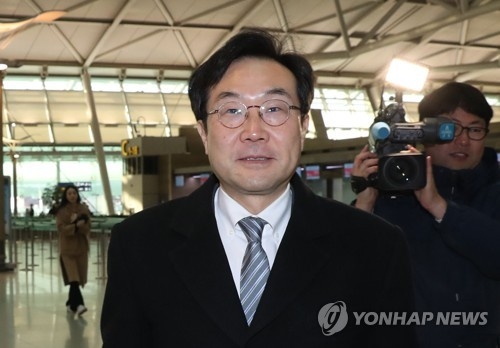