The nuclear-powered supercarrier, accompanied by several guided-missile destroyers and other warships, left its homeport in San Diego last week for the "regularly scheduled deployment" to the region, it said without revealing the scheduled arrival date and mission period.

The transition comes as part of the Third Fleet Forward initiative to enable the unit to support the operations of the Japan-based Seventh Fleet in its area of responsibility.

"The deployment marks the second time the Carl Vinson Strike Group will operate throughout the Indo-Pacific region under U.S. 3rd Fleet's command and control," the Navy said. "The strike group became the first in recent history to demonstrate the command and control construct called 3rd Fleet Forward when units completed a six-month deployment last year."

The Vinson is expected to reach the waters near the Korean Peninsula ahead of the opening of the PyeongChang Olympics on Feb. 9.

It remains unclear whether the flattop will join the annual South Korea-U.S. drills to be staged after March.

It participated in the Foal Eagle training last year. 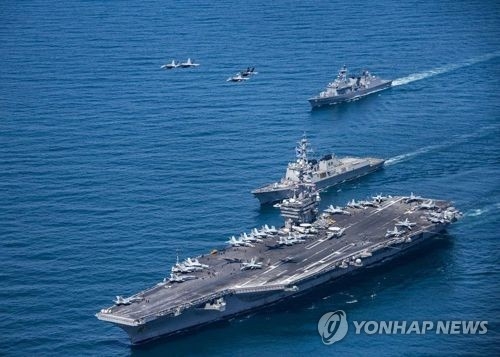 USS Carl Vinson on its way to Western Pacific

USS Carl Vinson on its way to Western Pacific