WASHINGTON, Jan. 7 (Yonhap) -- The United States is determined to end North Korea's nuclear weapons program through diplomacy, but it is also prepared to use force if necessary, the head of the Central Intelligence Agency said Sunday.

That policy has been consistent under President Donald Trump, unlike in previous administrations, Mike Pompeo, director of the CIA, said in an interview on Fox News.

"We want the regime to understand that unlike before, we are intent on resolving this, and it is our firm conviction that resolving this diplomatically is the correct answer," he said, referring to the regime of North Korean leader Kim Jong-un. "But that this administration is prepared to do what it takes to ensure that people in Los Angeles and Denver and New York aren't held at risk from Kim Jong-un having a nuclear weapon." 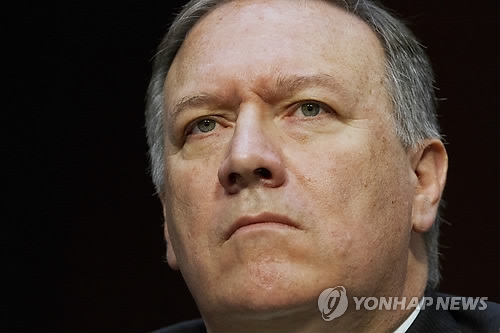 Trump's tweet last week, in which he boasted about having a "nuclear button" that is "much bigger and more powerful" than Kim's, helped send that message, according to Pompeo.

He rejected accusations that the president spoke lightly of the possibility of nuclear war.

The American spy chief also questioned North Korea's sincerity in coming out for high-level talks with South Korea Tuesday. Although the meeting is expected to focus on the North's possible participation in next month's Winter Olympics in PyeongChang, South Korea, it could also help lower tensions over Pyongyang's nuclear and ballistic missile programs.

"The North Koreans are behaving out of fear. That is, they are very concerned that America, for the first time in an awfully long time, is serious about denuclearizing the peninsula," Pompeo said. "And I think they are trying to find a foothold, trying to find a place to reach out. And we'll just have to wait and see how the conversations go Tuesday."