SEOUL, Jan. 8 (Yonhap) -- A high-ranking United Arab Emirates official began a two-day visit to Seoul on Monday, raising expectations that he may address growing speculation that Seoul's presidential chief of staff traveled to the Middle Eastern nation last month to secretly settle a dispute between the two countries.

The opposition has raised various possibilities, including suspicions that Im's trip was to allay the UAE's concerns about the impact President Moon Jae-in's nuclear-free policy will have on the 2009 deal for South Korea to build and manage nuclear reactors in the Middle Eastern country.

The opposition has also alleged that Im's visit could have been to address the UAE's grievances over Seoul's alleged attempts to reduce its troop presence in the country or to revise "secret" mutual military agreements signed under Moon's predecessors.

Shortly after arrival, Al Mubarak had 30-minute closed-door talks with National Assembly Speaker Chung Sye-kyun. During the meeting, he was said to have voiced his desire to continue to develop relations between the two countries. 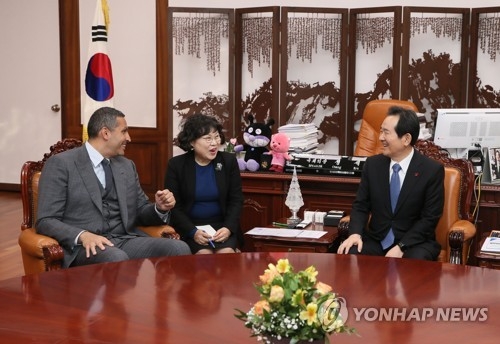 He is expected to arrange Moon's possible visit to the UAE. During phone talks in June, Moon told the crown prince that he hoped to attend the ceremony to mark the completion of a nuclear reactor built in the country by South Korea.