SEJONG, Jan. 8 (Yonhap) -- A new case of bird flu has been discovered at a duck farm in South Korea's southwestern region, the agriculture ministry said Monday, in the latest outbreak in the duck farming region.

The Ministry of Agriculture, Food and Rural Affairs said H5 avian influenza (AI) was detected at a farm in Naju, 355 kilometers south of Seoul, and culled all of the farm's 16,500 ducks.

Quarantine officials plan to slaughter an additional 53,500 ducks at five other farms located within 3 kilometers from the affected region as part of preventive measures, the ministry said.

If the case is confirmed as a highly pathogenic strain of the virus, it will be the second AI case in Naju since one confirmed on Dec. 29, the ministry noted.

Since the first outbreak of highly pathogenic AI on Nov. 19, South Korea has confirmed 11 bird flu cases and culled 1.46 million ducks and chickens. Except one confirmed case in Gyeonggi Province last week, all other outbreaks have been isolated to Jeolla Province, a major duck farming region. 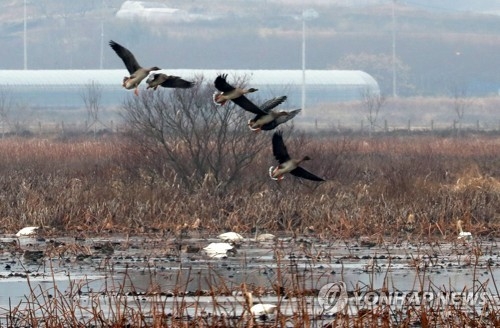