SEOUL, Jan. 8 (Yonhap) -- The Korean box-office smash "Along With Gods: The Two Worlds" is not yet ready to relinquish its box office throne.

The fantasy action blockbuster added 1.3 million views from theaters all over the country in its third weekend, bringing its domestic total to 11.5 million, according to data made available on the website of the Korean Film Council on Monday. 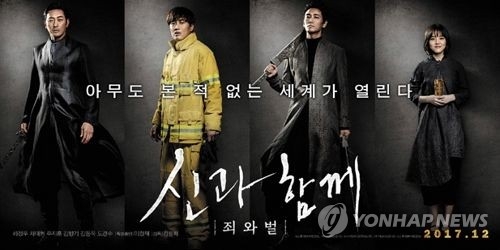 The film, released by Lotte Entertainment and directed by Kim Yong-hwa, broke the 10 million ticket sale mark Thursday. It later became the 11th most-viewed film of all time in South Korea, surpassing the 2015 hit court drama "The Attorney."

Based on a popular webtoon of the same title by Joo Ho-min, the movie tells the story of a righteous firefighter who is judged in seven hells for 49 days after his death, guided by three grim reapers. It stars Ha Jung-woo, Cha Tae-hyun, Ju Ji-hoon and Kim Hyang-gi.

"1987: When the Day Comes," a local period drama about the historic nationwide protests against the repressive military regime in June 1987, was a close second with 1,057,877 ticket sales in its second weekend. Released Dec. 27, it had amassed over 4 million viewers as of Sunday. 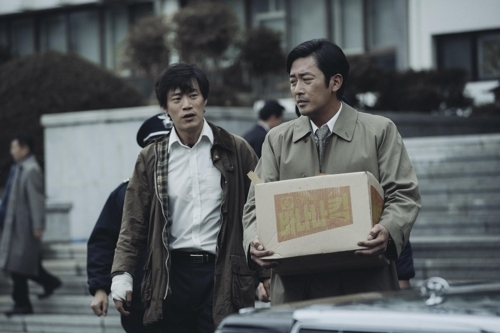 "Jumanji: Welcome to the Jungle" took third place with an audience of 657,418. It is the long delayed sequel to the 1995 action-comedy "Jumanji," which stars Robin Williams.

"Steel Rain" fell to fifth place with 119,230 views in its fourth weekend in theaters.

The Korean action blockbuster starring Jung Woo-sung and Gwak Do-won is about two men from South and North Korea who combine forces on a secret plan to prevent a nuclear war on the Korean Peninsula. Released Dec. 14, the movie has sold 4.35 million tickets.