Last week, Trump boasted that his "nuclear button" is "much bigger and more powerful" than that of North Korean leader Kim Jong-un. He sent the tweet after Kim warned the United States that a nuclear button sits on his desk at all times.

Critics accused Trump of trivializing the possibility of nuclear war. 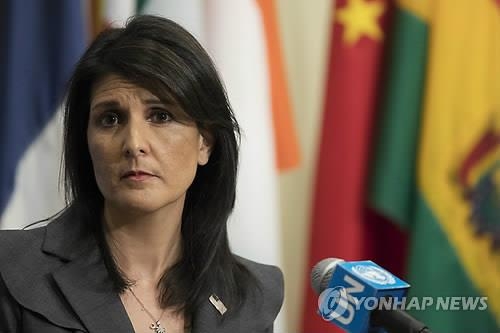 "I think that he always has to keep Kim on his toes," Haley said in an interview on ABC. "It's very important that we don't ever let him get so arrogant that he doesn't realize the reality of what would happen if he started a nuclear war."

Tensions escalated to new levels last year as Pyongyang accelerated its testing of nuclear weapons and ballistic missiles designed to strike anywhere in the U.S.

"We're not going to let them go and dramatize the fact that they have a button right on their desk and they can destroy America," Haley said. "We want to always remind them we can destroy you too, so be very cautious and careful with your words and what you do."

In a break from his fiery rhetoric, Trump expressed a willingness Saturday to speak directly with Kim -- but based on a "very firm stance."

The ambassador explained that Trump's statement meant the North would have to first stop its weapons testing and then demonstrate that it will get rid of its nuclear arsenal.

"I think stop testing is very important and for a significant amount of time," she said. "And then you go and you work toward the next step. This is going to be phases. This isn't going to happen overnight as we've seen, but it's a dangerous situation."

That South Korea and North Korea are meeting Tuesday to talk about the Olympics will be a "good thing," she added.

"Those two countries have to get along. That's good for the United States that they can at least start getting back into talks," Haley said.

Although the meeting is expected to focus on the North's possible participation in next month's Winter Olympics in PyeongChang, South Korea, Seoul hopes it will also help lower tensions on the peninsula.

Trump has to keep N.K. leader on his toes: U.S. envoy

Trump has to keep N.K. leader on his toes: U.S. envoy