SEOUL, Jan. 8 (Yonhap) -- President Moon Jae-in's approval rating rebounded back to over 70 percent, a survey indicated Monday, as inter-Korean relations showed signs of a thaw, including an agreement to hold the first high-level talks in two years.

The Realmeter survey of 2,010 adults showed that 71.6 percent responded that Moon is doing a good job, up 3.1 percentage points from a week earlier, while negative assessments fell 0.9 percentage point to 24.1 percent.

The Jan. 2-5 poll had a margin of error of plus or minus 2.2 percentage points.

It was the first time in four weeks that Moon's rating has risen to over 70 percent. 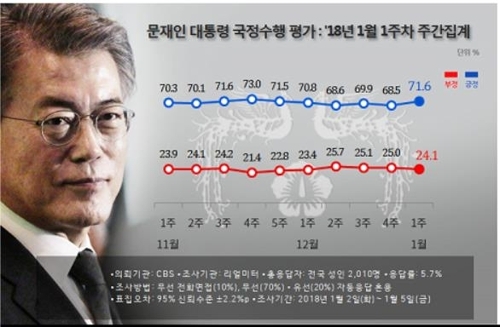 Realmeter attributed the rise to heightened public expectations about a thaw in relations with North Korea as the two sides agreed to hold their first talks in two years.

The agreement came after North Korean leader Kim Jong-un expressed his willingness in his New Year's Day address to send a delegation to next month's Winter Olympics in South Korea's PyeongChang, as well as to hold talks with the South to work out details of its participation.

The main opposition Liberty Korea Party's rating also rose 1.8 percentage points to 18.6 percent, while the ratings of the minor opposition Bareun Party and People's Party, which have been in merger talks, stood at 6 percent and 5 percent, respectively.

A separate Realmeter survey showed that 76.7 percent of South Koreans support North Korea's participation in the PyeongChang Winter Olympics, while 20.3 percent expressed opposition to it, saying pressure and sanctions should take priority.

Another poll found that 54 percent of South Koreans have no objections to the South paying for the expenses of the North's delegation, while 41.4 percent expressed opposition to such payment.
(END)

Moon's approval rating rebounds back to over 70 percent: survey

Moon's approval rating rebounds back to over 70 percent: survey