SEOUL, Jan. 8 (Yonhap) -- Prosecutors requested a court order on Monday to freeze some 6 billion won (US$5.62 million) in assets held by former President Park Geun-hye to forfeit them in case of a conviction of bribery involving the state spy agency.

The Seoul Central District Prosecutors' Office said it has filed for the temporary asset seizure against her new 2.8 billion-won residence in southern Seoul and some 3 billion won worth of checks.

If the court grants it, Park will be forbidden from making transactions with her bank savings or property, including sales, transfers or putting property up for lease, it said.

On Thursday, Park was indicted for additional bribery and loss of state funds charges for accepting some 3.65 billion won from the National Intelligence Service (NIS) between May 2013 and July 2016. She is already on trial over 18 different charges in connection with a corruption scandal that removed her from office in March last year.

The court order can freeze her assets until the end of the trial for the NIS bribery case.

Public records show that Park sold off her old residence for 6.75 billion won and purchased the new house for 2.8 billion won. Aside from the 3 billion won checks, she holds another 1 billion won in cash, which is not subject to the court order for now, according to the prosecution.

Government data show that Park reported a total of 3.73 billion won in assets as of the end of 2016, but such figures on public servants' asset holdings don't reflect the real value of a property since they only submit their appraised values of the lands. Park's old residence is only worth 2.71 billion won by that standard.

Prosecutors have obtained a similar court order for 7.8 billion won allegedly paid as kickbacks by Samsung to Choi Soon-sil, Park's longtime friend at the center of the scandal. Park's assets were ruled out at the time as subject for a freeze since the prosecution determined that Choi was the prime beneficiary in the alleged crime. 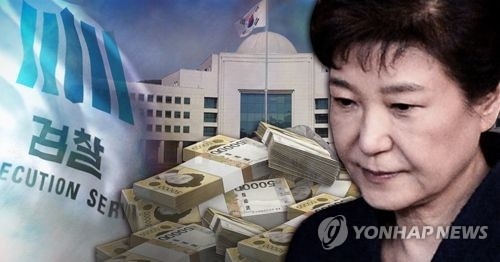