SEOUL, Jan. 8 (Yonhap) -- Stark differences between two minor parties over how to address the escalating nuclear standoff with North Korea resurfaced Monday as a key hurdle to their proposed merger.

Rivals of Ahn Cheol-soo, the leader of the center-left People's Party, pressed him to clarify whether he would alter its largely dovish approach to the North since he has pushed for the union with the conservative Bareun Party, which takes a tough stance on the communist regime.

"Leader Ahn Cheol-soo must explain whether he would abandon our party line in tune with Bareun Party leader Yoo Seong-min's Cold War-like stance on the North," a group of party dissenters said in a statement.

The dissenters have maintained that joining forces with a party lacking ideological kinship could obscure its political identity and irk its supporters in the southwestern Honam region. In defiance of the merger move, they have sought to build their own party.

Of great concern to them is the possibility that their adherence to former President Kim Dae-jung's "Sunshine Policy" of engaging with the North could waver should the party merge with the Bareun Party.

The Bareun Party has said that the policy has only allowed the North to stall for time to develop its nuclear and missile programs. But supporters of the policy claim it contributed to reducing cross-border tensions and crafting a rare -- if short-lived -- inter-Korean detente.

Ahn rejected suggestions that there are "big gaps" in policy stances between the two parties.

"From my perspective, there does not appear to be a big difference," he told reporters. 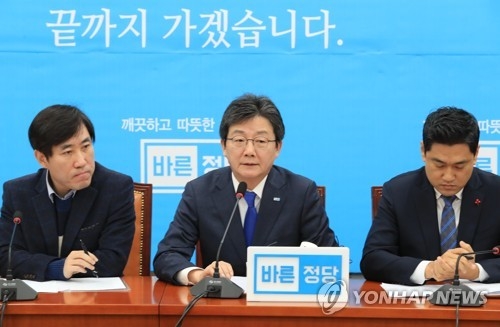 "As we, together, discuss what we will want to achieve in the future, I believe we can find common ground," he added.

Ahn has been pushing for the merger as part of efforts to strengthen the party's parliamentary foothold ahead of the June gubernatorial and mayoral elections, seen as a referendum on President Moon Jae-in's first year in office.

He also seeks to position the party as a powerful centrist alternative to the major two parties -- the ruling Democratic Party and main opposition Liberty Korea Party.

Compounding the challenge to the merger scheme was the Bareun Party leader's sudden ambivalence to it. Yoo, who was previously a vocal supporter of the merger, said his party has yet to finalize its decision on the merger issue.

"Of course, there hasn't been any final decision yet," he told reporters. "The final decision is one that should be made not by me alone but by the party as a whole."

Asked about the two parties' gaps on security, Yoo said, "When the security crisis is this serious, what is right is (to merge) with a party that is on the same page when it comes to the resolution of the crisis."

Yoo's shift in tone came as some party members moved to leave the party in protest against the merger plan.

Rep. Kim Se-yeon, a former policy chief of the party, signaled his intention to bolt from the party, while Gyeonggi Province Gov. Nam Kyung-pil, a core party member, has said he would not join the integration move.

The Bareun Party plans to hold a meeting of its lawmakers on Tuesday to further discuss the merger issue. 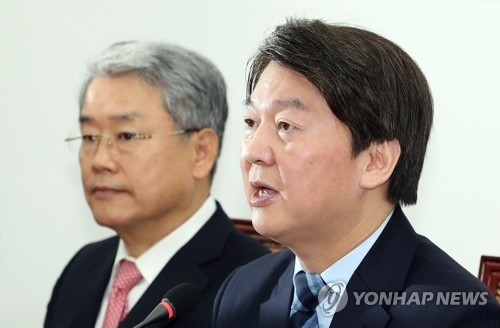