"The government is looking beyond North Korea's participation in the PyeongChang Olympics to consider ways to improve inter-Korean relations and seek close collaboration with the international community to bring about North Korea's denuclearization," Foreign Minister Kang Kyung-wha said during the launch of a foreign ministry task force in charge of foreign state leaders' visits to the Olympics.

"If North Korea joins the PyeongChang Olympics, it would strengthen the profile of the event as a peace Olympics," she noted.

"Seoul has been mustering every effort to make the PyeongChang Olympics and Paralympics a festival and international sports event for peace," Kang said, referring to North Korea's interest in joining the Olympics hosted by the South.

Kang has previously said about 43 foreign state leaders have so far committed to visit South Korea during the Olympics.

On Tuesday, ministers of South and North Korea will meet on the inter-Korean border at Panmunjom to discuss North Korea's participation in the Olympics. 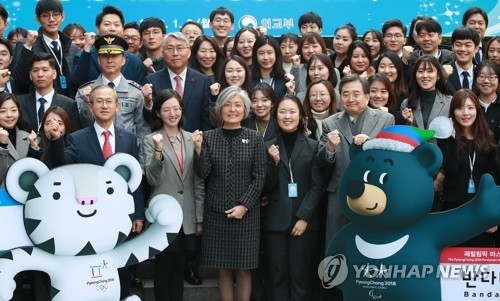